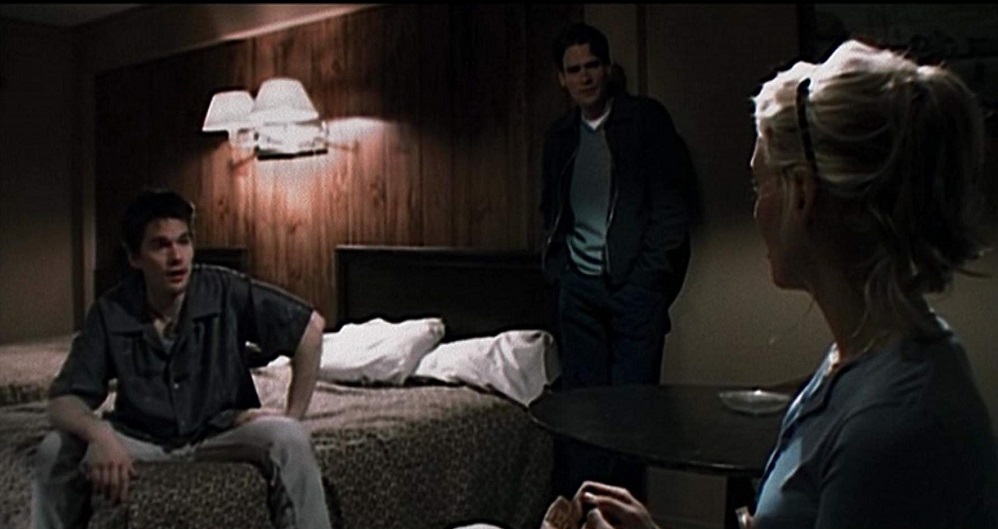 I'm not sure what the Chinese calendar says, but I'd be willing to bet it's the Year of the Linklater. If it's not, it certainly should be; to mix postseason metaphors, Austin's hometown auteur is batting two for two in a year when most of his contemporaries are lucky to have gotten a player on base. Cinematically, it's been bunts all 'round, with a few notable exceptions (Coens and Mamets, mostly), and the pure hard fact that Linklater has released not one but two engaging, genuine, and above all, intelligent pictures is surely cause for celebration. Tape couldn't be more different from Waking Life, the director's other film currently in release, but both films are marked by their intellect and passion, and by their willingness to take risks in a filmic landscape too often marred by witless formulaics and by-the-numbers also-rans. Whereas the terrific Waking Life is a sprawling intellectual macrocosm that urges you to think outside the box (or even to dispense with the box entirely), Tape, adapted by Stephen Belber from his play, is a confined microcosm: three characters, one room, and a whole lot of head-trippery. Hawke plays Vince, an obsessive, druggy character who reunites with his old high school chum Johnny (Leonard) in a dingy Lansing, Michigan, motel room while the latter is in town to screen his new film at the local fest. They're later joined by Thurman's Amy, Vince's old high-school girlfriend who, at the end of the trio's senior year, ended up sleeping with Johnny under highly questionable circumstances. Vince believes it was date-rape, and before Amy arrives, he goads Johnny about the incident. In between the shaming, Vince shotguns Rolling Rocks, smokes pot, and does lines of blow; he's an Oakland firefighter by day, but a dealer by definition, and when Johnny bugs him to clean up his act, he parries with increasing hostility. Watching Hawke and Leonard spar like this -- verbally, and to a point physically -- is engrossing. Belber's script (and presumably his play as well) is lean, devoid of excess verbiage, and bursting with rapier-keen dialogue. This is what great dialogue -- and by extension great movies -- is made of, and Linklater has wisely chosen not to deviate from Belber's original work in any obvious way. The film is claustrophobic in that it occurs entirely in one small space, but the thematics called into play here, like the subjective fluidity of memory, friendship, and communication, are all over the place. Hawke, Thurman, and Leonard are note-perfect in their respective roles, Linklater's digital video camera is everywhere at once, and the final 10 minutes contain some of the most powerful filmmaking out there. And although it hasn't been noted by the director as far as I know, it's almost a Dogme 95 film, as well (Linklater has stated that Tape was not shot on location, as a purebred Dogme film would be, but it's awfully close -- he can confess his transgression on the DVD if so inclined). Smart, playful, disturbing, and most of all alive -- it's time somebody gave Linklater his MVP designation for good. (See related interview with Ethan Hawke on p.46 of this week's Screens section.)