Images seem to pop out of the giant screen in this 3D Imax extravaganza, and if the Polarized glasses they give you to watch the movie aren't positioned properly on your face it's possible your eyeballs might just try to pop out of your head, too. There's no denying the magnificence of this movie's optical effect; the 3D immersion in the huge screen's images provides the same kind of fun as riding a top amusement park's best ride. The movie, however, is a gallery showcase rather than a narrative film or documentary. CyberWorld 3D is a collection of animated vignettes solicited from some of the world's top animators, which were then given the 3D technology treatment and packaged in this new film. Wraparound segments with a hostess voiced by Jenna Elfman and three bugs were specially created for the film and link the disparate clips. Mostly, CyberWorld 3D exists as a state-of-the-art display of the potential for 3D animation. Included are the dance sequence from Antz, portions of the "Homer3" episode of The Simpsons, and scenes from a host of other more abstract or purely imagistic animated works. As a sensory bombardment CyberWorld 3D is breathtaking, just don't expect the movie to have any dimensional aspirations beyond that. 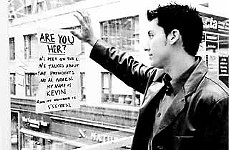 On the Line
Apparently looking to extend his 15 minutes, 'N Sync crooner Lance Bass stars in his feature-film debut as Kevin, a Windy City ad exec who ...