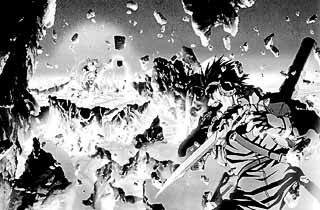 This animated 1998 actioner about a Japanese superspy out to defend the world's most guarded archaeological secrets from evil Americans has to be seen to be believed. The frenzied, realistic animation (by the team who also made Akira) pulls out every stop to fool the eye. Spriggan, whose hero is what Indiana Jones would be if he possessed the balletic superpowers of Spider-Man and a body suit that fires grappling hooks, is what action fans wish all action movies could be, let alone animated ones. Spriggan makes great use of the anime medium's resources, and it's accessible enough to captivate any action fan unschooled in the art of anime. Fans of Merchant/Ivory who have never considered the usefulness of grafting a Gatling gun to one's arm are advised to explore elsewhere, however. A spy story that ultimately involves the secret of Noah's Ark, Spriggan employs stunning tricks of depth and movement, as when the camera zips back and forth across details of soldiers while we gaze at the scene through the hero's binoculars. Suddenly we realize there's no reason for this other than to make us forget we're watching animation. The movie also projects an amazing sense of physical weight, a rarity in American animation. The last couple of years have seen a slew of theatrical releases of anime films that even fans of Asian animation were unexcited to watch. X, released last year, was an action-packed bore, while Perfect Blue and Jin Roh each offered languid, stylized views that alienated the audience with impenetrable storylines. Anime, a medium rather than a genre, seems to have mystified American distributors as to which titles to pluck from video and release to the theatres. Spriggan, however, proves to be an excellent choice.