It's likely there's going to be some “viewer disturbance” going on after audiences catch a whiff of this routine and thrill-less suspenser. A child in peril always provides good subject matter for Tinseltown nail-biters, and Domestic Disturbance has that base covered, in addition to being loaded down with some of the postmodern attributes of a male melodrama. You see, everything in Frank (Travolta) and Susan's (Polo) divorce is going fine, except for the occasional acting-out of their 12-year-old son, Danny (O'Leary). But when Susan remarries, Danny's childish infractions begin to catch up with him, so that when he finally runs away and tells a story about his new stepfather (Vaughn) having murdered a man, no one is inclined to believe him. Too bad … because even though his new stepfather has bamboozled the whole town into believing he is handsome, rich, and likable -- real Chamber of Commerce man-of-the-year material -- we know what Danny also knows: His stepfather is Vince Vaughn, and when Vaughn's not chumming around with his pal Jon Favreau and playing onscreen dim bulb to Favreau's bright light, Vaughn is cutting a swath through Hollywood as the sicko “It Boy” of the moment. Thus, the menace he poses in Domestic Disturbance comes as no surprise to the audience and, furthermore, any anticipation of sparks cast by hot testosterone conflicts between Travolta and Vaughn are also dead in the water. Here, Travolta is in his lumpen-prol mode rather than his flamboyant loose-cannon mode, which makes for dull and predictable dynamics between these two male leads. This lack of sizzle is even more disappointing coming from the director who previously gave us the top-notch thriller Sea of Love. The only one who emerges unscathed from this acting quagmire is Matt O'Leary, whose believability as the intelligent, troubled, fearful, and brave young man carries the story's emotional weight. Buscemi, as usual, delineates a pathetically seedy character, at once repulsive yet endearing. But his character disappears from the action early in the game. Domestic Disturbance works best as a cautionary tale for divorced dads: Be careful should your ex-wife choose to remarry, because it's likely that whither she goest, so goest your kids. In these modern times, evil stepfathers have achieved narrative parity with evil stepmothers.

Alpha
The first-ever boy and his dog story 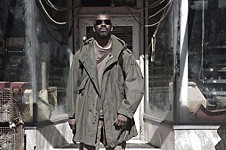