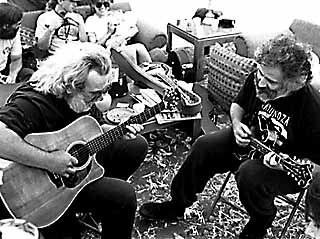 Captain Trips Unplugged. Using the parlance of the day, the “unplugged” terminology might be the best way to get across the idea of Grateful Dawg -- home-movie footage cobbled together into an 80-minute documentary tracing the friendship and musical collaboration between Grateful Dead frontman Jerry Garcia and mandolin virtuoso David Grisman. The music that unites the two men is bluegrass; the story is told of how they first met in 1964 at a Bill Monroe concert in Pennsylvania, both having made the pilgrimage to the show and then meeting up and picking together in the parking lot between sets. During the early Seventies the two played together in a legendary bluegrass band called Old and in the Way, but then Garcia, it is told, went off to make “Dead” music while Grisman forged ahead with “Dawg” music. After a separation of some dozen years, Garcia and Grisman rediscovered each other and began playing together and recording again in the Nineties as Grisman/Garcia. Although Grateful Dawg includes some archival and concert footage, the bulk of the documentary consists of home videos of Grisman and Garcia comfortably trying things out and jamming in Grisman's living room and home studio. The footage was filmed by Grisman's daughter Gillian and Justin Kreutzmann, another “Dead” kid, who rolled tape simply for “the sake of rolling tape,” according to the director. In addition to bluegrass picking, Grisman and Garcia are captured playing and singing sea chanteys and children's songs, musically wandering where their spirits took them, enjoying each other's company and musicianship. The duo had even come to resemble each other in appearance: big, bearded, and beatific. But to paraphrase one of the film's interviewees, it was as though David's influence tightened up Jerry's playing while Jerry's influence loosened David up. The interviews, although they reveal occasional nuggets such as this or a Vassar Clements moment in which he tries to describe the “little lope” in Garcia's picking, are otherwise overly adulatory and repetitive. Since Garcia died in 1995, Grateful Dawg serves as a de facto memorial to the iconic Dead head. His widow, Deborah Koons Garcia, is also listed as a creative consultant. If the film's archival reminiscences disappoint in their redundancy and lack of new information, the music more than makes up for these defects. The songs included in the film are played in their entirety: This was the only stipulation dad Grisman made on his daughter's use of the old footage. Thus, a beautiful version of the evocative 17-minutes-long “Arabia” is heard in the film as well as acoustic versions of “Friend of the Devil,” “Ripple,” and “Sittin' Here in Limbo” and many other unreleased live audio tracks. Also included is an unreleased music video filmed in 1991 by Kreutzmann of “The Thrill Is Gone,” in which Garcia and Grisman posed in Twenties gangster garb. Grateful Dawg is a must for any Deadhead and of genuine interest to any music fan, even if its documentary chops hit a few sour notes.