By then, there was nothing left to prove. What had originated a decade earlier in the pages of the Cahiers du cinema as a critical assault on French filmmaking was now a full-blown international movement, complete with superstars, commercial success, and a secret handshake to link the modern with the postmodern. In the mid-Sixties, the New Wave had already given rise to youngish auteurs as intent on deformalizing technique as they were on unconventionalizing narrative. Unburdened by political strife and blessed with a half-century's cinematic hindsight, they made the movies they wanted to make and made them cheaply, quickly, and - most importantly - with a cool eye cast on postwar culture. They had succeeded by 1960 with the crest of Godard's Breathless. Five years later, then, Paris Vu Par … is a celebration, six postcards shot lovingly in the city where it all began. Six vignettes celebrating the New Wave itself, the emergence of new filmmakers and the triumphs of others. Celebrating yet another midcentury innovation that came of age in the 1960s: the 16mm camera. Lightweight and handheld, it was meant for documentarians, which suited these celluloid essayists just fine. While "Montparnasse-Levallois," Godard's contribution to Six in Paris, is modest - a simple story of a Canadian woman's double love affair and the crossed-up telegrams that go with it - its shaky romance and twist of fate, its ambient noise and long-lens street shots contrasting with confining interior sequences, is what the collection is all about. Pollet's "Rue Saint-Denis," which never takes us beyond a dingy apartment, tiptoes with a mordant empathy along the dialogue-based dynamic of a worldly prostitute and her inept john. These are all odd, urbane fables: Rouch and Rohmer's masterful existentialist adventures reveal the dangers of walking out your door, while Chabrol's "La Muette" ("The Silence") is an unremarkable yet unsettling tale of a child using earplugs to tune out his bickering parents. If Paris Vu Par … isn't its filmmakers at their best, it might be its filmmakers at their happiest, shining freely in the hip, slick City of Light. 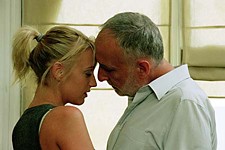 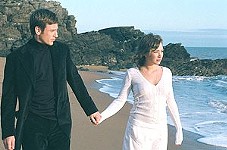