Two nuclear physicists reveal their frank hopes and fears within the context of the new Krushchev era, a situation that is paralleled by the director (and film school teacher) in his collision between socialist realism and the Russian new wave. This series is a 11-film survey of Russian filmmmaking in the post-Stalin era, a period during which the state's ideological hamstrings on artists were noticeably loosened. 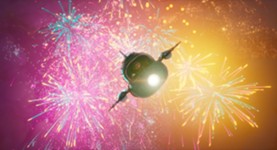