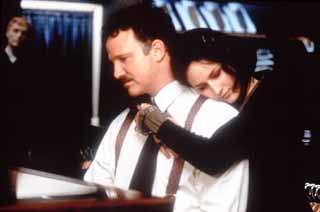 With critics and audiences still a-thrum over Terry Zwigoff's mesmerizing Ghost World this is perhaps not the best time to be rolling out another quirky little tale of transgenerational love -- especially when it falls as short of the current benchmark as Christine Lahti's debut feature does. Yet even if, as I expect, My First Mister vanishes from our memories with the speed and totality of seltzer fizz in a highball glass, it does boast one lasting distinction. That would be the splendid performance by Sobieski, who ends her long run as industry-mag buzz princess and arrives as a full-fledged star. Not that this is any big surprise. The sheer vividness of her presence in Eyes Wide Shut and A Soldier's Daughter Never Cries hinted at something magical gleaming beneath the surface. But in this role as “J,” a self-pitying high school goth girl involved in a bizarre stalker/apprentice/soulmate relationship with a fiftyish clothing store owner named Randall (Brooks), Sobieski's gifts finally are in full, radiant display. We first meet the anomie-dripping J in an amusing rush of scenes that lay out her grievances against her ditzy mom (Kane) and nimrod classmates who make her life a Boschian Hell. Later, at the local mall, she spots the solitary Randall dressing his store window. Something about him (his sad but purposeful manner maybe?) strikes her fancy, and she applies for a job. Against his better judgment, Randall takes Siouxsie Sioux Jr. on as a stock clerk and pro bono social work project. I found many of the early scenes between Sobieski and Brooks to be nearly as funny, touching, and credible as analogous ones between Thora Birch and Steve Buscemi in Ghost World. Screenwriter Jill Franklyn's lines -- and especially Sobieski and Brooks' delivery of them -- deal with lifestyle clashes, psychosexual tension, and the pair's cautiously evolving friendship in ways that mine both the easy surface laughs and the emotional substrata. The sexual content, such as it is, is played farcically, and no overt hanky-panky occurs. Still, there's a subtle edginess in this film's core relationship that makes it all the more dismaying when the story loses its imaginative force in the second half and goes all Penny Marshall on us. It's hard to imagine that this retrenchment into gestural schmaltz was imposed by hack producers, who are far more prone to bollixing the big-budget productions. Instead, blame for this major failure of nerve and focus probably belongs solely to Lahti and Franklyn. Happily, though, not even their shortcomings manage to sabotage Sobieski's impressive coming-out party. Nor should they prevent you from enjoying one of the year's best acting performances. 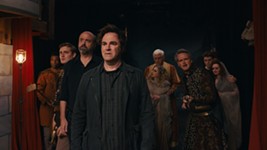 Ghost Light
The curse of Macbeth is given effervescent life