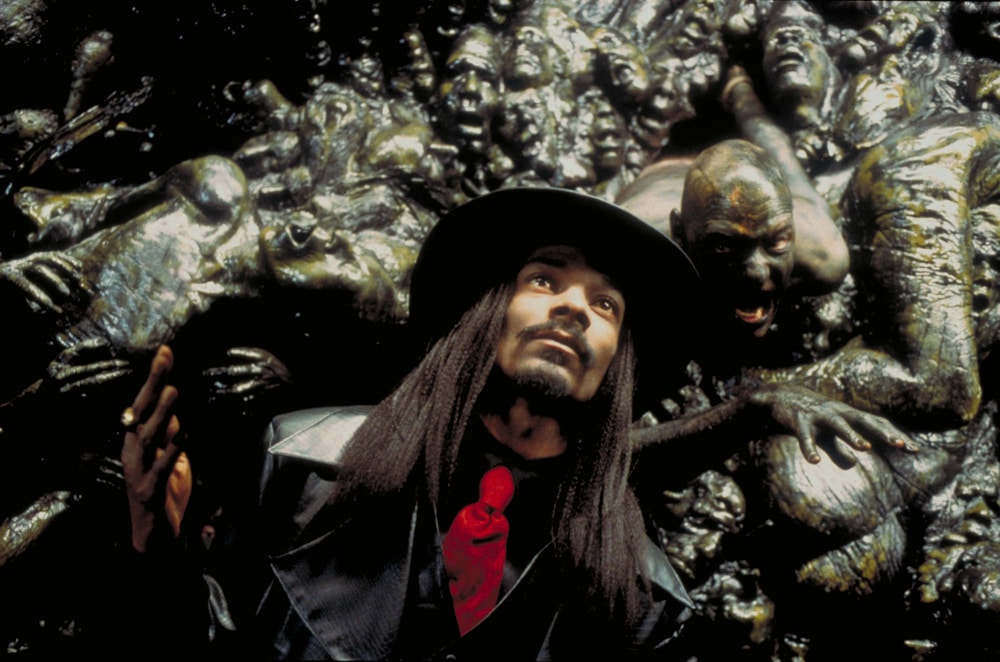 Papa's got a brand new body bag. It's been nine years since Dickerson teamed with former pal Spike Lee to shoot Malcolm X and in the interim both men's creative output have been, ah, colorful. Dickerson's more so than Lee's, for my money, if only because he hasn't shied away from the sort of B exploitation pics that he loved as a kid. 1995's Tales From the Crypt Presents: Demon Knight was a mish-mash of goofball gore and spindly-legged undead, but any film that casts Billy Zane as the devil's right-hoof man and the great Dick Miller as a horny old geezer named “Uncle Willy” has got something going for it, and although I panned it at the time, repeat viewings courtesy of the USA Network have revealed its lowly charms more fully. Bones, which casts rapper Snoop Dogg as a Seventies-era pimp who returns from the dead to avenge his murder and get his freak on with a still-foxy Pam Grier, has got to be Dickerson's dream project. If you can put aside your love of logic and sense and just go with the spookshow flow of Dickerson's funky little flick, you'll love it. It's almost Halloween, after all, and Bones has no pretensions about what it wants to be. Dickerson knows the tropes of the horror genre in and out and he uses them to great -- if clichéd -- effect. There's even a whole sequence that's either a direct lift from or a cunning homage to Italian master Dario Argento's classic Suspiria. Blaxploitation horror films have been under-represented since Scream revitalized the slasher genre a few years back. Dickerson knows this and amps up his film with all manner of scares, from a glowing-eyed devil dawg (not Snoop) to maggots a'plenty and a Hellraiser-esque “Land of the Dead” that might even give Clive Barker a run for his money. Strictly speaking, the film is pretty cheesy, but in the end that's part of its willfully streetwise charm. Any film that casts Grier as a moaning, jewelry-bedecked neighborhood psychic has got some mighty big cajones; as always, she throws herself into the role and isn't a damn bit afraid to look silly, which makes her part all the more juicy and memorable. The plot barely registers apart from Snoop Dogg's vengeful spirit -- something about kids wanting to open a hip-hop club in his old stomping grounds -- but Dogg is just terrific; he makes the film. His restless, gut-chomping superpimp-from-Hell is a great character and Dogg swaggers through the film in a floor-length, fur-collared outfit that would put Huggy Bear to shame. With his smooth-as-smoke voice and street-strutting panache, Dogg has the makings of a genuinely great actor. When he's on screen the film crackles, and even when he's not it's a trippy, funhouse ride.