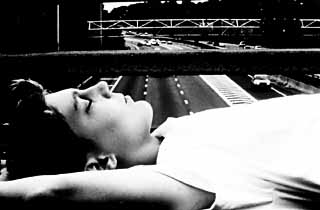 The drone of cars hurtling toward and from Long Island suffuses this extraordinarily confident debut of writer-director Cuesta and serves as the film's central metaphor, appropriately if a bit belaboredly. In voiceover, 15-year-old Howie (Dano) relates that some lanes head neither east nor west but “straight to hell”; it's a dire statement, but a fitting one. Howie's house, a Byzantine suburban monument to 1980s “good taste,” is repeatedly introduced with a street-level establishing shot that couldn't be more banal, yet it sets the film's tone perfectly. Indeed, L.I.E. is a paradox, balancing the contradictions and ambiguities of its characters and setting with a careful hand that rarely falters, even though the film seems dramatically thin at times. Bright but aimless after the death of his mother on the titular expressway, Howie pals around, skips school, and breaks and enters with his three buddies: a slack-jawed malaprop said to be schtupping his own sister (Costa), the broadly drawn son of a cop (Donnelly), and Gary (Kay), the charismatic ringleader, who fascinates Howie romantically. Meanwhile, Howie's property-developer dad (Altman) cavorts with a gym-bunny girlfriend but seems destined for a crash in a building scandal. The movie picks up when Howie robs Big John (stalwart character actor Cox), an aging, crusty former Marine with a cherry red muscle car, a kiddie porn habit, and a connection to Gary, who's added hustling to his criminal repertoire. Howie and Big John embark upon a curious friendship that wavers between seduction, extortion, and an authentic emotional connection. There's palpable trust among the director and his ensemble, and no moral nuance is left unexplored. The dialogue and situations are uncomfortably frank, but they don't seem exploitative or dishonest. Cuesta's teenage characters are moral agents in their own right, and while Cox's character may be larger-than-life, he's not a satirical caricature of the neighborhood predator who just can't help himself (as is the case in Todd Solondz's black dramedy Happiness). Rather, he's a flawed and even sympathetic person faced with the opportunity to help or harm. The interplay between these two characters is one of the film's remarkable achievements; the other is its refusal to be pessimistic or smug. That said, the script itself (by Cuesta, Gerald Cuesta, and Stephen M. Ryder, all first-time scribes) is slight at times, likely to frustrate viewers accustomed to a conventional arc. It's disappointing when Kay, an interesting young actor with a Jean-Pierre Léaud quality, bows out at the end of the first act, and his is not the only character to enter or exit the stage mechanically. (Another, an archly concerned guidance counselor who pops up from time to time, is meant to stand in for the audience.) These shortcomings are not insignificant, but they do not diminish the considerable merits of L.I.E. On a side note, there's no reason for that NC-17 rating. These teens are no more transgressive than the young stars of any winking matinee romp (say, American Pie); their sexuality simply isn't played for laughs. 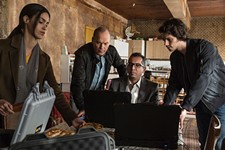