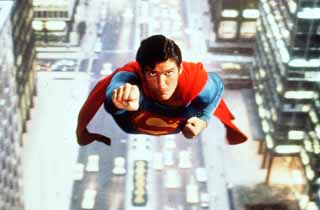 Look, up on the screen! It's a bird, it's a plane, it's the original 1978 film version of Superman! Just when we can use a champion to inspire us as we fight a never-ending battle for truth, justice, and the American way, the Man of Steel arrives on the scene like a true hero­ and looking better than ever. See, in preparing for Superman's release on DVD, director Richard Donner re-cut the film, adding in 12 minutes of previously unseen footage ­ most notably a brief chat between the novice superhero and dad Jor-El's hologram in the Fortress of Solitude and Krypton's Last Son busting through deathtraps of bullets, fire, and ice on his way to Luthor's sub-subway lair­ then the whole shebang was digitally restored, with the sound digitally remixed in Dolby Surround. As seen in an all-too-brief theatrical release in San Antonio this spring, the new crispness of image and audio finally does justice to this long-underrated adventure film, which boasts a smart screenplay by Robert Benton and David and Leslie Newman, striking cinematography by Geoffrey Unsworth (especially in the Smallville sequence), bright comic turns by Margot Kidder and Gene Hackman, and of course, that winning performance by Christopher Reeve in the title role. Believe a man can fly? You bet!