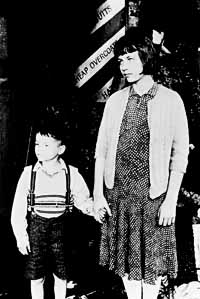 Best off to begin with a bias: I am not a fan of Catholic guilt. So it was with a distinct lack of enthusiasm that I approached Liam, Stephen Frears' new film about a young boy growing up Catholic: Hasn't the mean priest/confused sexual feelings/Hail Mary-ing kids thrust into a lifetime of therapy been done already? Well, yes, but then, this is Stephen Frears -- a name that for many jogs the memory in a needling way -- familiar, but not easy to exactly recall. A quick scan of his filmography, and he comes more clearly into focus: High Fidelity, The Grifters, Dangerous Liaisons, My Beautiful Laundrette. Just as the breadth of his work is surprising (“He made that?”), Liam too is just as unexpected. For starters, it's more than Catholic guilt. It's a coming-of-age story, a startling glimpse at the way children perceive their world, and the way in which each of these perceptions is processed into character-defining tics. It's also a fragment of time and place -- Liverpool on the eve of WWII -- that functions as the staging ground for the anti-Jewish sentiment that would swiftly overrun Europe, and for a budding fascism that served as the wrong-headed salve for a working-class stratum bottomed out by the Depression. It's a lesson in sexual confusion, punctured pride, the hypocrisy of social and religious institutions, and the often twisted way in which values take root in children and adults. It's a lot to chew on in one little film, but Frears, working from a superlative script by Jimmy McGovern (who wrote the novel on which the film is based), plays out each element surprisingly and with varying degrees of subtlety. Told from the point of view of 8-year-old Liam (Borrows), that perspective is jarring at first -- Frears uses low camera angles and shapes crucifixes and authority figures, even a happy, drunken New Year's Eve celebration into something huge and vaguely menacing, as it would be to a small, stuttering child such as Liam. As the titular lead, first-time actor Borrows achieves a remarkable expressiveness that, due to Liam's speech impediment, mostly comes out in Borrows' quivering lips, big, bold eyes, and little-body racing through dirty Liverpudlian streets. At its core, Liam is a family drama (and, despite some treasured comic moments, this is very much a bleak drama); the actors who comprise Liam's family are equally affecting. Burns, as older sister Teresa, is a quiet, conflicted force, and Hart (best known as a young John Lennon in Backbeat) is almost unendurably moving as the out-of-work, well-meaning father. Both the scripting of the character and Hart's masterful delivery defy cliché; his ultimate succumbing to the wrong kind of solace is heartbreaking. (See interview with Stephen Frears on p.50 in this week's Screens section.)