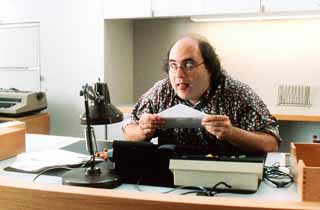 A canny paean to clerical temps, Haiku Tunnel hits enough of the right notes to make office slaves of all stripes cheer. At times, its satire is scarily spot-on. Desk jockeys are frantically attached to premium office supplies (a Uniball pen becomes a fetish object, like the Swingline stapler of 1999's Office Space). Managers named “Bob” and “Jim” answer their speakerphones with a resounding “Yello?” The mail cart moves at a glacial speed, network logins fail, and secretaries swill gimmicky drinks (the “volcano,” which emits smoke) en masse at happy hour. And an aspiring novelist (Josh Kornbluth) must decide whether to remain “totally temp”-- a state of being that is free and self-determined on the one hand but insubstantial and isolated on the other, and is obliquely described by film's title -- or “go perm.” As an office farce, the film has undeniable charms, even if some of the jokes are predictable (the Schuyler and Mitchell law firm will be abbreviated to “S&M,” with dream-sequence sight gag appertaining). The inevitable employee-orientation sequence (which features Harry Shearer) is particularly droll. What trouble there is with the film probably lies with Kornbluth himself. He has the neuroses and stuttery mannerisms of a Woody Allen and the schlumpy doughboy quality of a Jon Lovitz, so it's little wonder that he seems to elicit a love-it-or-hate-it reaction, polarizing critics at Sundance and beyond. (Kirk Honeycutt, writing in The Hollywood Reporter, expressed a wish “to have Josh accidentally electrocuted by office machinery.”) It's fairer to say that a little Josh Kornbluth goes a long way, and we have quite a bit here -- he co-wrote (adapting the script from an original monologue from 1990), co-produced, co-directed, and dominates the screen utterly, often in a metatextual, cutely postmodern style. The supporting cast does yeoman's work, valiantly attempting to make a dent, but the Kornbluth brothers have stubbornly refused to reimagine their material as a more conventional ensemble comedy. They thereby risk miscalculating an audience's interest in a feature film almost entirely devoted to the omphaloskepsis of its creator, whose schlemiel persona is lovably pathetic at best and obnoxious at worst. No doubt this effort will find its fans, as it should, but there's a lot of lost potential in its 89 minutes.