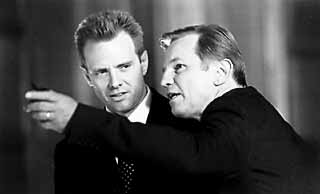 The extremely questionable taste in Trinity Broadcast Network's last-minute decision to go ahead with the release of this film, which contains graphic images of Middle East warfare, dead Arabs, terrorists, and other Biblically inspired mayhem perhaps best left -- at this point, anyway -- to CNN is nothing compared to the awful realization that the careers of once-great genre actors Biehn (The Terminator) and York (Logan's Run) have toppled into an abyss far more treacherous than that hellbound one below the Megiddan Plain. Megiddo is a prequel to the 1999 film The Omega Code. York reprises his role as haughty media mogul-cum-antichrist Stone Alexander, and there are plenty of quotes tossed off for good measure from the Book of Revelation, but not much else. This wannabe epic is merely cluttered and incomprehensible. The plot is essentially an Irwin-Allen-by-way-of-Fundamentalist-Christianity version of current events. Worst of all, in a film that is very, very bad (though sporadically entertaining, like an old CBS Movie of the Week high on millennial jitters), is the fact that -- and there's no other way to put this, sorry -- the computer-generated Satan appears to have been designed by a renegade cubist, or possibly an animator who's spent too much time working on the kid's show Re-Boot. The Beast has an angular, sloping mug with bad hair and worse wings. He's not terrifying -- he's goofy, and his final-scene appearance, coming directly on the heels of a very well-executed CG Battle of Armageddon with all sorts of swooping fighter jets and bustling tank columns, is a letdown of Biblical proportions. Thank God, then, that we have until then been able to bask in Michael York's omnivorous performance as New World Order leader Stone, who has united the entire planet into 10 peaceful sectors with the exception of those headstrong isolationists in America. Led by Stone's virtuous (if conflicted) brother David, the Yanks' unwillingness to align themselves with the NWO results in Stone's unleashing of various plagues, comets, signs, and wrathful portents, and ends with that fabled battle in the crossroads of the Middle East. I should mention the film's other decisive weakness here, the dialogue, which consistently teeters between being made up of casually tossed-off Bible quotations and histrionic hell-raising. “You don't stand a chance in Hell,” David tells his brother at one point, to which Stone coolly replies, “Oh, I'll always stand a chance in Hell!” Get it? Haw! For all its awful, opportunistic scare-mongering (the film really should have been shelved in the wake of recent events), Megiddo is barely even worthy of a straight-to-video release, as simplistic and silly as it is. The only great thing about it that I could see is that it gives legendary character actor Udo Kier a chance to play devil's advocate (literally) once again, which is always fun to watch, but not that much fun.