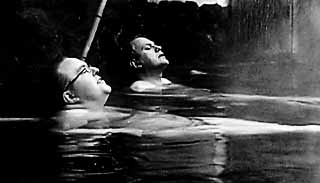 Enlightenment Guaranteed depends on the two actors who all but carry it: Ochsenknecht, who has an aristocratic Kelsey Grammer quality, and zaftig Wöhler, the moon-faced yin to Ochsenknecht's pickle-sucking yang in this dramatically slight, improvisational dramedy about two German brothers adrift in Japan, both geographically and spiritually. It's a peculiar comedy, but one that will probably please fans of Dörrie (1985's Men and 1994's Nobody Loves Me) and her low-key style; for the uninitiated but venturesome Arbor types, it will likely make a nice surprise. The brothers' journey begins after pompous Oschsenknecht's long-suffering wife (Zieser) vacates their tastefully space-planned Munchen flat, family in tow. Across town, Wöhler dispenses feng shui wisdom, meditates, and grooms his coffee-table sand garden; an Orientalist of sorts, he's planning a trip to a Zen monastery in the Japanese countryside, unaware or unconcerned that his detachment is driving his wife (Kriener) to adultery. With nothing to lose, the brothers depart together (nursing a hangover, Oschenknecht complains constantly into his digital camcorder) and land in familiar enough territory: the fish-out-of-water farce, Tokyo-style. The movie strikes a blithe, crowd-pleasing note as its characters encounter one mishap after another, and Hans Karl Hu's camerawork has the freewheeling, street-level quality you'd expect from a digital production set in such a bustling, alien milieu. (In one charming scene, the brothers battle a twee animated Sanrio character dispensing incomprehensible advice -- but not cash -- from a Japanese-language ATM.) But the movie's heart is in its third act, when the two finally reach the monastery. Amid the anticipated complications of German urbanities practicing Zen ritual, the movie itself begins practicing a sort of cinematic zazen, encouraging not just its characters but its viewers to divest themselves of their Western preoccupation with haste and the illusion of control. The pace slows measurably, the characters become more introspective, and the story trails off -- developments that are certainly deliberate and daring but may lose viewers hitherto hooked by the accessibility of the plot. To some, these choices will seem like missteps, and there's something to be said for that. It weakens the film to have to the characters step outside the narrative, using the camera as an open mike rather than allowing their development to unfold more organically, and the resolution isn't very satisfying as a result. Fortunately, Ochsenknecht and Wöhler stay true to their characters. By keeping it real, they keep this offbeat and ultimately affirming movie from unraveling into what could easily be dismissed as New Age feel-goodism for the middle-age crazies.