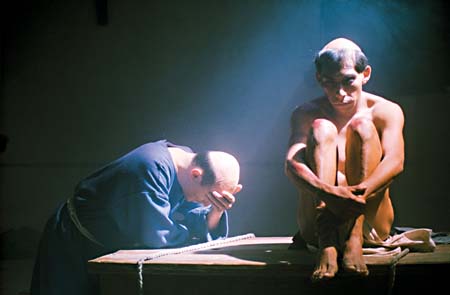 During this epic's initial release in its native Mexico in 1999, the film became the highest-grossing drama released in the country up until that point. The Other Conquest (La Otra Conquista) is a work of historic fiction that focuses on the brutal aftermath that followed the takeover of the Mexican empire by Spanish conquistador Hernando Cortés and his army in 1519. First-time filmmaker Carrasco delivers an immensely striking film, which is as notable for its epic visual and narrative sweep as well as its evenhanded study of a nation under psychological as well as physical assault. Although The Other Conquest experienced a modest U.S. release in 2000, it is now being given another gradual U.S. rollout. This re-release comes in response to the much-heralded crossover success of the "three amigos," as the triumvirate of Mexican directors Guillermo del Toro (Pan's Labyrinth), Alfonso Cuarón (Children of Men), and Alejandro González Iñárritu (Babel) have been popularly categorized in the press. The recent success of Mel Gibson's Apocalypto and various Christian-themed productions must also be factored into the decision to re-release this film in the States. However, whatever the decision-making process, we are the beneficiaries, for The Other Conquest is a marvelous vision: at once spectacle, history lesson, and potent psychological drama. Set in the years between 1520 and 1531, the film begins in the wake of Cortés' entry into Mexico, the death of Emperor Moctezuma, and the demolition of the Aztecs' Great Temple, and continues the primary action to just before the moment in 1531 when the vision of the Virgin of Guadalupe is said to have appeared. Carrasco grounds the story in the experiences of the fictional character of Topiltzin (Delgado), one of Moctezuma's sons,bg who is a witness to his people's massacre, and then captured by Cortes' army, renamed Tomás, and brutally forced to convert to Catholicism. Whether Topiltzin's conversion is true or a ruse to preserve his religious and cultural identity is just one of the many interesting propositions the film raises. Topiltzin also has hallucinations that become an elaborate amalgam of Aztec and Christian imagery, blending the Aztec Mother Goddess with the Virgin Mary. Writer/director Carrasco, along with cinematographer Arturo de la Rosa weave a stunning visual tapestry while also telling a specific yet universal tale about cultural subjugation. Plácido Domingo, father of the film's producer Alvaro Domingo, performs an aria over the film's closing credits.