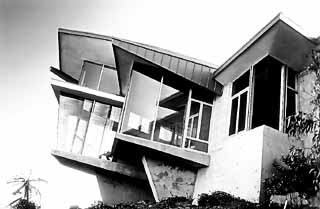 The hokey thriller The Glass House is so full of cracks that it's a wonder that it remains intact for its entire length. It is truly one of the year's dumbest movies. The script by Wesley Strick is a Dickensian nightmare that only a social worker with a high-income-bracket clientele can appreciate: two orphans, whose parents are killed in an automobile accident, are placed in the care of foster parents from hell whose motives are suspect from the start. Once the teenagers are whisked away to their fabulous new home overlooking the Malibu beach by their new filthy rich guardians, Mr. and Mrs. Glass -- yes, the film's title has so many meanings -- it doesn't take long to figure out that these Glasses shouldn't throw any stones. Mr. Glass shamelessly makes lecherous advances toward high-school-age Ruby at nearly every opportunity; Mrs. Glass doesn't notice his indiscretions because she's too busy shooting up morphine. Despite their impeccable Architectural Digest surroundings, the couple has a cash-flow problem, which might be why they have shown an interest in Ruby, her younger brother, and the kids' $4 million-dollar trust fund. Although it's clear at the outset that something's fishy about the Glasses -- they feed the kids calamari, for God's sake -- only Ruby seems to suspect anything, and even then, the film attempts to explain the Glasses' behavior with ridiculous rationalizations, all in the name of a warped sense of suspense. You're meant to question whether Ruby is a paranoid teenager, but the only thing that crosses your mind is that someone should ask child protective services to arrest these guardians on charges of parenting without a license. In fact, all of the adults in this film are poor authority figures, from the teenagers' trust attorney whom they can't trust (another clever play on words!), to the state-appointed investigator who drops her inquiry after a single visit, to the estranged uncle who comes out of nowhere at the film's beginning and end. But The Glass House never effectively plays on everyone's childhood fear of having no one to turn to in a time of crisis, mainly because its situations are so ludicrously implausible. (See The Night of the Hunter for a film that veins that fear like few have.) The only suspense in the movie comes from director Sackheim's occasionally effective use of the titular structure, an imposing fortress of cool, contemporary design that's vaguely reminiscent of James Mason's magnificent home near Mount Rushmore in North by Northwest. There's literally no place to hide in this glass-encased edifice, which ultimately becomes a prison for the two wards. The film suggests that Ruby is a tough chick by showing her smoke a cigarette near its beginning (oddly enough, she never lights up again in the movie) and by revealing that she was once placed on probation for plagiarism, but you don't buy it for a minute. As Ruby, Sobieski looks like an honors student pretending to be a bad girl. She has two expressions in this film: sullen and more sullen. It's difficult to imagine what her character is either thinking or feeling, given that her face is almost mask-like in its doll-porcelain fineness. In its not-so-subtle fashion, The Glass House draws parallels between Ruby's indecision about taking action and the predicament of Hamlet, the subject of an English essay she isn't motivated to write. About the only similarity between the two, however, is that once Ruby takes her revenge, few are left standing. No doubt, after this experience, she'll have such insights into Shakespeare's Dane that she'll at least get a C+ on that paper. Branded
In a dystopian society, corporations can see inside people's minds and keep them deluded, but one man fights back.