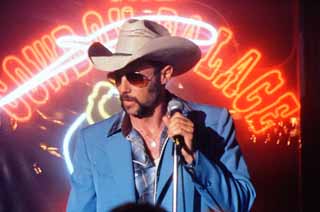 As his name suggests, Sunny Holiday (Gries) -- Jackpot's central character -- is the embodiment of wishful thinking. Sunny travels the karaoke circuit of the western United States in a pink Cadillac accompanied by his manager Lester Irving (Morris), as his life is measured out in canned songs while waiting for his big break and ticket to stardom. Certain that their pot of gold awaits them at some ratty club down the line, Sunny and Les are a sad portrait of American dreamers held captive by their own self-delusions of professional competence and lottery-like windfalls. Truth be told, Sunny (whose signature song is tellingly George Jones' “Grand Tour”) is not an especially accomplished vocalist and would probably be lost without other singers' styles and lyrics to ape, and Les has few real managerial talents apart from his dogged loyalty to his client. The two men, however, are an inseparable duo, and in many ways a reflection of the lead characters in Twin Falls, Idaho, the haunting debut film (about adult conjoined twins) made by twin brothers Mark and Michael Polish. This filmmaking pair (Michael directs, Mark writes; they co-produce) moved a few miles south with this sophomore project (Jackpot, Nevada, is mentioned as a town about 100 miles south of Twin Falls and happens to be one of the contest stops on the characters' karaoke trail). Both Twin Falls, Idaho and Jackpot were shot by cinematographer M. David Mullen, whose mood-setting visual contributions cannot be underestimated. Jackpot was shot on high-definition video, yet the image clarity and resolution of the film transfer give no hint of video's usual flatness and artificiality. The look the filmmakers achieve is just right for capturing the atmosphere of the smoky bars and clubs that Les and Sunny frequent night after night, and the long hours of intimacy they share in the front seat of the Cadillac as they travel the lonesome Western roads by day. Jackpot undoubtedly will be more satisfying if viewed as pure character studies than as picaresque narrative escapades. It's a road picture and a buddy movie, but Sunny and Les are trapped in an endless cul-de-sac in which events and experiences are repetitive and predictable (to everyone but themselves). Success on Les' terms means “cutting Christmas albums in July.” Frustratingly, we learn little more of Les' personal background or the reasons for his committed belief in Sunny's talent. He does, however, pray to God before every performance. Regarding Sunny's background, we learn a lot more. In fragments, the movie shows us images of Sunny explaining his departure to his exasperated wife (Hannah) and infant daughter -- perhaps a sign of Sunny's disharmony with life that he could leave a small child and wife as beautiful and as desirous of him as Daryl Hannah. On the road, Sunny is frequently presented with willing female companionship. One affair -- with a waitress played by Peggy Lipton -- turns out disastrously, although he tries to literally, and figuratively, clean up the mess with the jugs of E-Z Solution cleaner the men pathetically carry in their car trunk. Other opportunities arise when Sunny encounters a passed-out woman (Bernard) and her underage daughter (Clouse), a sequence whose extremely discomforting possibilities are later explained by Sunny as a “test from God.” Fitting in with this film's array of past and present TV stars is Anthony Edwards, who appears toward the end as Sunny's hapless brother. Jackpot won't be for all tastes. Its doomed portrait of guileless dreamers may be found lacking in plot activity and empathetic characters. But for anyone interested in a movie that wipes clean the grungy patina of self-delusionment, Jackpot hits solid pay dirt. 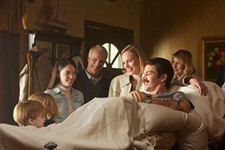