With twice the area of Texas, the African nation of Congo, once called Zaire, has endured more than its share of hell since Belgian King Leopold colonized the massive state in the 19th century. Despite a wealth of mineral deposits and a bustling diamond trade, or perhaps because of it, Congo has been a nexus for Western imperialism, from the aforementioned Belgians to, inevitably, the CIA. For Westerners, the plight of Congo is a distant affair; the 150,000-plus refugees who have taken up residence in the country after fleeing the Hutu/Tutsi conflicts of neighboring Rwanda in the past decade are occasionally glimpsed on CNN, but since the botched U.S. intervention in Somalia, Congo, like most of Africa, is viewed, at best, as a geopolitical hotspot best left to its own horrendous device. The death of CIA-installed Prime Minister/despot Joseph Mobuto Sese Seko hasn't made things any better, either, nor has the recent assassination of Mobutu's successor Laurent Desire Kabila. I mention all this because the more you know about Congo before seeing Lumumba, the more you'll appreciate Raoul Peck's fine, incendiary portrait of that country's first freely elected prime minister, the legendary Patrice Lumumba, who arrived at his post in 1960 as the Belgians were finally exiting after 80 years of colonialism. Lumumba's story is rich in drama ñ he lasted a brief two months in office, and subsequently “vanished” some seven months later under still-mysterious circumstances. That his lieutenant and longtime friend Mobuto had a hand in what was essentially a martyr's death is rarely contested anymore. The true facts of Lumumba's death, however, remain obscure. Peck's film grabs you by the short hairs from the very first, as a brief series of titles announce the fact of Lumumba's ascendancy to the PM position and then give way to horrific footage of a pair of white soldiers disposing of the body of a black man. Who this man is, and what, exactly is going on here is unknown; it's only in Lumumba's final moments that the true horror is revealed. In between these grisly bookends is an arresting dramatized portrait of a patriot driven to create a future for his homeland out of sheer willpower. When we first seen Lumumba (the riveting Ebouaney), he's just taken a job hawking Polar Beer to the pub-crawlers of Leopoldville (now Kinshasa). That's hardly the trade he seeks, however. Instead, he hungers for Congolese independence, and seeing that it may well be right around the corner, he aligns himself with the growing Congolese National Movement, starts giving charismatic soapbox orations, finds himself tossed into jail and beaten, and then, in a stroke of almost impossible good fortune, has his presence in Brussels formally requested by King Leopold II. The most astounding aspect of Peck's film ñ apart from Ebouaney's mesmerizing lead ñ is that everything here is straight out of the headlines, from the destructive Cold War paranoia of the West, which ultimately is what led to Lumumba's death and Mobuto Sese Seko's debilitating reign, to the dangerous paterfamilias world-view of the Belgian elite. Director Peck never allows the biopic to bog down in historical and period fluffery, either. Lumumba is as fluid and intellectually stimulating as the man himself, a tragic, heartfelt take on an event some 40 years old that feels as fresh as yesterday's Times. 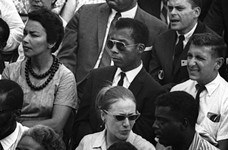