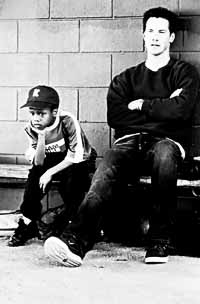 Contrary to what publicity wonks, with their one-line clippy pitches, would have you believe, Hardball is not a Bad News Bears for the urban set. For starters, Keanu Reeves is no Walter Matthau. Reeves is spottily engaging as Conor O'Neill, a down-on-his-luck street punk with a huge gambling debt. Twelve thousand dollars in the hole and desperate for a way out, he strikes up a deal with a stockbroker (McGlone): In exchange for $500 a week, Conor will take over the coaching of a baseball team composed of inner-city kids. Conor and the team initially butt heads -- Conor's just biding his time till he makes his next big score -- but you know in the end, he'll see the light. However, it takes a dismally long time for Conor to have that epiphany; his gambling problem eats up the first 45 minutes, while the film's trajectory treads water and the audience cools its heels. That plot is a distraction from what matters: the eight boys on the Team Kekamba. The young actors, mostly novices, are beguiling, with their mix of foul-mouthed bravado and little-kid love of the game. One minute they're swaggering and invincible, the next, scared young boys, scared of abandonment, scared of getting kicked off the team, scared of walking home in the projects after dark. They also provide every one of the laughs here, and the majority of the dramatic moments -- at least the ones that click. (Michael Perkins and DeWayne Warren, as brothers Kofi and G-Baby, are particularly stand-out, soulful little men.) In the third act (frankly, too late in the game), the film takes a nosedive into melodrama when a tragic shooting changes the team. You can't fault the filmmakers for going there; violence is an awful inevitability for the boys on which the film was based (kids in Chicago's Cabrini-Green housing project). And the young actors handle the tragedy soberly, strongly, and realistically. But Reeves doesn't strike the right chord -- you never get the feeling he's not acting. Not so for the Kekambas. When the boys are tossing balls around and bopping in time to Notorious B.I.G., they -- and the film -- are right-on.