Recently laid off from his dock worker job in Normandy, Felix (Bouajila) bids farewell to his lover and hits the road, with the plan of walking to Marseilles to find the father he's never known. HIV-positive and of Arab descent, Felix is looking for the mythical father figure, but along the way, he creates a makeshift family of his own, with the revolving cast of eccentrics he encounters along the way. Each (mis)adventure comes with a subhead – "the little brother," "the grandmother," "the cousin" – strangers who fill some void in Felix's life. His journey is the stuff of a picaresque novel, episodic and crammed with the sort of unbelievable occurrences that fuel fiction. (In the span of five short days, Felix is a witness or participant in an act of racial violence, a car theft, a car wreck, anonymous sex with a kite-flyer; further, each new arrival in his life has no qualms about launching into their life story within minutes of meeting him.) Of course, that's what makes Felix so appealing: his ability to open himself up to possibilities, and to quickly achieve an intimate connection with those he meets. But at the same time, the filmmakers constantly keep Felix at a distance. He's often given only medium and long shots; close-ups, the most effortless way to bond an audience to a character, are rare. Bouajila, as our sole constant throughout the piece, keeps himself aloof throughout. Felix is a troubled, yet optimistic character, eager to root out the joy in every situation and embrace it (he is not, however, the least bit naïve in that ambition). But Bouajila maintains an impenetrable coolness, even when his face is about to split from smiling; we may observe him on his journey, chuckle or be moved along the way, but we may not feel as if we are a part of it, too. His disease, too, keeps us at a distance – or rather, the reluctance of co-writers and directors Ducastel and Martineau to discuss it with us. The film has earned some press for the casualness with which Felix's HIV-positive status is treated. The disease is always present in the form of Felix's daily meds, but he never reveals how it affects him, nor is he particularly forthcoming with the individuals he meets. To a certain extent, the film should be celebrated for not allowing the disease to define its character. Yet, it exists. It does define the character, at least in some small part. That omission rings a little false, even irresponsible when Felix has sex with a stranger. But then, yes, this is the stuff of fiction, where individuals can drift in and out of another's life and make extraordinary, unbelievable things happen. 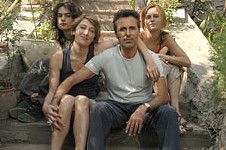 Côte D'Azur
The French still like to get their sex on, a fact confirmed again and again in this breezy, featherweight sex farce.