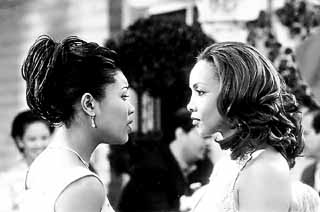 Two Can Play That Game

Advertising ace Shanté Smith (Fox) has the world on a string: skyscraper office, tastefully appointed L.A. manse, cute convertible, and Keith (Chestnut), a hunktacular, well-behaved attorney beau. While her girlfriends (Mo'Nique, Jones, and Robinson) struggle with their cheating, impecunious, and commitment-phobic men, Shanté keeps Keith in line with a regimen of rules, positive reinforcement, and subtle manipulations -- with each trick in her book articulated directly to yon audience in a gimmick borrowed from this film's illustrious predecessor, 1997's Def Jam's How to Be a Player. Alas, Keith “shows his ass” by taking a bootylicious colleague out for dinner and drinks at Shanté's favorite nightspot. Thus begins Shanté's “10-day program,” a stringent man-improvement campaign involving thong panties, prick-teasing, romantic decoys, and calculated doublespeak. As Keith's jovial buddy Tony (Anderson) notes, “The CIA ain't got shit on a woman with a plan.” However, like Bill Bellamy, the “roach-ass ghetto pimp” of Player, Shanté will learn a lesson about lying and head games in what we'll call “Act III: The Player Played.” It lacks the drawing-room refinement of a Feydeau farce, to say the least, but this battle-of-the-sexes urban romp has its share of comic pleasantries and attempts a breezy, just-us-girls tone with a certain amount of success. (In one montage, a rebounding Shanté endures the overtures of various losers, including a shirtless Lenny Kravitzesque pseudo-hipster who absent-mindedly tweaks his nipple ring under a leather vest.) Much credit is owed to Anderson, the Falstaffian sidekick of many a lowbrow laff riot (such as this spring's See Spot Run). An accessible and playful comic actor, Anderson can pull off the film's more tasteless dialogue (“She got you laid out like a two-dollar crack whore!”) and still seem like a lovable goofball; there's no misogynistic aftertaste to the film, even as Anderson's character rallies Keith against Shanté's manipulations. It's unfortunate that his zaftig build and buffoonish mien ostensibly make Anderson ineligible for leading-man status, since he's so much more engaging than Chestnut, whom the filmmakers treat more or less like a hunk-shaped doorstop, dropped into the story to keep it propped open. His relationship with Fox (another live wire onscreen) seems less than compelling as a result, and that's a problem. Another drawback is the film's perfunctory plotting and egregious product placement. Whenever a scene stands still long enough for a trio of Miller Genuine Draft girls in trashy hot pants to get down to a prominently featured, quick-to-market soundtrack, you know the producers aren't really concerned about their credibility. Despite these faults, it's probably unfortunate that this summer comedy, with its matter-of-fact Afrocentrism and positive message about the importance of plain dealing in romantic relationships, should be treated like a second-class niche product, shunted off to theaters after Labor Day with zero marketing.