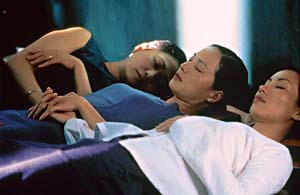 Vertical Ray of the Sun

If there is a heaven, I hope it looks like Vertical Ray of the Sun. Hands-down the most gorgeously put-together piece of celluloid in recent years, this Vietnamese film is swimming in aqua blues and every color a melon can be. The sets, too, are lovely: beaded curtains that sing when they shift, just-right weathered shutters, immaculate bowl collections. It's like the unveiling of Pottery Barn's Hanoi Collection. Once you get over the art design (impossible), there is a narrative to be found beyond a two-hour-long advert for a Vietnamese vacation (I'm sold). The story revolves around three sisters, although the film moves so delicately, so precisely frame by frame, it's difficult at first to determine if there's even a story to tell. The film begins with the extended family's memorial of the sisters' mother, a year after she has passed away; the film ends one month later with the anniversary of their father's death. In that month, the complicated lives of the three sisters are painstakingly revealed. The eldest, Suong (Nguyen), tries to heat up her lifeless marriage with an affair, unaware that her restless husband has secrets of his own; the middle sister, Khanh (Khanh), is newly pregnant and happily married -- at least at first glance -- to a writer; little sister Lien (Yên-Khê) seems the most cheerful and untethered of the three, but she's unnervingly naïve and has an ambiguous (but definitely eyebrow-raising) relationship with their brother, who's also her roommate. (Their beds adjoin, with one thin mosquito net between them; Lien has an uncomfortable way of rolling over to big brother's side every night, a fact she simply giggles about in a disarmingly charming way.) Writer/director Anh Hung Tran (The Scent of Green Papaya) takes his time with the film, but once the action picks up, the sisters' secret lives begin unraveling with the ease and speed of a spool of thread (mango-colored, of course). In truth, it's a bit much to cram into one month (and one film). Vertical Ray of the Sun is not unlike Magnolia in its breadth and ambition and, yes, sensational dysfunction (although Tran's film has the good sense to be a little more subtle about its melodramatic tendencies -- no frogs falling from the sky here). The cast is phenomenally talented and, fittingly, full of beautiful creatures; the sisters in particular are provocatively expressive with the simplest of gestures. The magnificence of the film's pieces does not quite add up to a satisfying whole -- and I suspect that's the fault of the too-broad narrative and a third-act tendency toward forced artsiness -- but in capturing the mood of a midday rainstorm, or a long, cat-like stretch to the mournful rumbling of Lou Reed, or, my god, those colors ... Vertical Ray of the Sun would be hard-pressed to find an equal.