All Over the Guy

Like most freakish accidents, falling in love is sometimes just a matter of good timing. In the romantic comedy All Over the Guy, the physical and emotional attraction between one couple is instantaneous, while the relationship between another can barely get off the ground. The fact that the head-over-heels lovebirds are straight and the tempestuous twosome is gay isn't of much consequence here; the potential for success or failure in this kind of thing really isn't a matter of sexual orientation. The film's script (by Dan Bucatinsky, who also produces and stars) begins with a shaky farcical premise: Four twentysomethings become romantically entangled after the two heterosexuals in the quartet arrange a blind date between their respective gay best friends, for the less than altruistic purpose of advancing their own mutual attraction. The initial encounter between Tom and Eli doesn't go well -- it's as if they're on altogether different planes -- but the whirlwind courtship between Jackie and Brett, who are also opposites in many respects, rushes headlong with hurricane force. (They become engaged to be married in what seems like a period of just a few days. An Aristotelian sense of time is not a strong point in Bucatinsky's screenplay.) Meanwhile, Tom and Eli keep running into each other, by accident and design, and their courtship wheezes and sputters. In the tradition of John Hughes, the film engages in simplistic armchair psychoanalysis to explain the boys' inability to get it together: It's all their parents' fault. The hot-and-cold Tom can't commit to anything beyond a one-night stand because he comes from a family of unloving alcoholics; the high-strung Eli can't relax because he comes from a family of wacky therapists. These insights don't illuminate as much as they detract, particularly when they materialize in shouting matches in which incriminations and harsh words are exchanged between the two characters. Frankly, Tom and Eli aren't very interesting people, especially when compared to their straight sidekicks, Jackie and Brett. It's a variation on the same dynamic in TV's Will and Grace, which also features a mixed foursome in which the two supporting characters are the true stars. Both Alexander and Goldberg are funny and appealing in their screwed-up West Coast neuroses; you find yourself perking up and paying closer attention to the film when they appear onscreen. To be fair to Bucatinsky, his script features some peppy dialogue that offers hilarious one-liners about the foibles of contemporary relationships and scathing observations about popular culture, including a go-for-the-throat critique of “gay”-themed movies like In & Out. (Is there a personal feud behind that vitriolic jab? An in-joke at play? Or is the whole thing attributable to plain old bitchiness?) All Over the Guy is a delight when its comic elements are in high gear. The next time Bucatinsky writes a script -- and no doubt he will -- he should place greater trust in his instinct for humor. Quite often, there's as much truth to be found in a good laugh as there is in a moment of high drama. 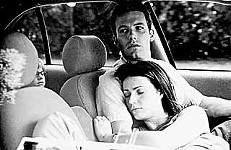 Bounce
A bounce is a crash that doesn't end. This pearl of post-traumatic stress wisdom is issued by Abby (Paltrow), a fluttery Los Angeles real estate ...