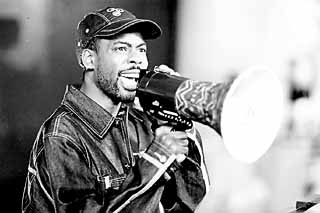 Jay and Silent Bob Strike Back

How much you enjoy Jersey boy Smith's balls-to-the-wall approach in this, the final episode in the Garden State trilogy (which initially began with 1994's indie breakout Clerks), depends a whole lot on your receptiveness to jokes about oral sex, the word “fuck,” and whether or not you find Smith's whole “View Askewniverse” all that appealing to begin with. For diehard Smith fans, the film is likely to come across as an orgy of yuks. For the rest, it's just an orgy of yuck. Based on the peripheral characters Jay and Silent Bob (Mewes and Smith), who were utilized as a sort of stoner Greek chorus in Smith's previous films Clerks, Mallrats, and Chasing Amy, this final outing places the inept, scatological-humor-inclined pair at the forefront of the plot and then surrounds them with a dozen or more characters who have also previously appeared in Smith's films. There's Joey Lauren Adams (briefly) reprising her role as Alyssa from Chasing Amy, along with Lee's character Banky and Dwight Ewell's gay comic book provocateur Hooper X from the same; Brian O'Halloran's Dante from Clerks, Shannon Doherty's character from Mallrats, and … you get the idea. The convoluted plot line follows the efforts of Jay and Silent Bob to thwart the production of a Hollywood movie being made about their comic-book alter-egos Bluntman and Chronic. When tipped off (by Affleck, no less) that there's a film being made for which they'll be receiving exactly zero recompense, the pair travel from their home stomping grounds of Jersey across country to Tinseltown, along the way hooking up with a bizarre nun (Carrie Fisher), a perverse hitchhiker (George Carlin), and finally a quartet of sex-bomb outlaws led by Larter (and including Jennifer Schwalbach, i.e. Mrs. Kevin Smith), all the while pursued by a Federal Wildlife Marshall played by Will Ferrell. At just over an hour and a half this may be too much for newcomers to Smith's Askewniverse (the phrase, coined by Smith, refers to his production company View Askew), though in his favor Jay and Silent Bob Strike Back frequently works by sheer dint of forcefulness; the gags here come so fast and furious that at least a quarter of them are bound to hit their targets, and for many people that will be enough. As always in the pantheon of Jay and Silent Bob, it's Mewes' long-haired stoner freak that gets all the good lines (they don't call him “Silent” Bob for nothing), and while many of those lines are goony catch-phrases like the ever-popular (and totally meaningless) “snootchie-bootchies,” the fact that Mewes can make you grin at Jay's outrageously overactive libido is testament to his not inconsiderable comic skills. In particular, a sequence in which Jay fantasizes about Larter as she makes her entrance is a small, dirty comic gem. Were that the whole film was as good as those 30 seconds. Half the fun comes, of course, from playing “spot the famous actor,” and to that end Smith has packed his film with familiar faces in various cameos: three American Pie cast members, virtually all the major players from his previous films, Affleck and Matt Damon, Chris Rock, Gus Van Sant, James Van Der Beek, and even Luke Skywalker himself, Mark Hamill. It's hit-or-miss comedy of the very broadest sort, but those who groove on deciphering obscure film-geek in-jokes will find their work more than cut out for them.