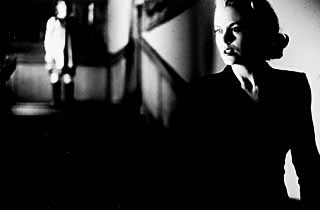 I'm tempted to call The Others the best haunted house film since Robert Wise's 1963 masterstroke The Haunting. In its wonderful and subtle use of atmospherics and top-notch performances, and a canny script that neither manhandles the audience into predestined and all-too-predictable shocks nor falls prey to juvenile shocker theatrics, it's that most rare of spookshows: a literate and mature ghost story that works on multiple levels simultaneously. And it's genuinely eerie as well. So yes, I'll go out on a limb and say The Others is the best haunted house film since The Haunting. It puts the lie to its tepid and dull contemporaries (such as the recent and silly remake of the Wise film) and proves beyond a doubt that a good ghost story, well told, still has the power to disturb and distress even today. Set in 1945 almost entirely within the claustrophobic confines of an imposing British manor house situated on the Isle of Jersey (part of Britain's Channel Islands), The Others revolves around Kidman's Grace and her two young children, Anne (Mann) and Nicholas (Bentley). Father Charles (Eccleston) is away at war and hasn't been heard from in many months, and Grace is struggling to keep her frayed nerves from failing completely. To make matters worse, the children suffer from an extreme photosensitivity -- exposure to direct sunlight can kill them, and so Grace (looking very much like a dour Grace Kelly) keeps the house in perpetual twilight, drawing thick velvet draperies against the light and allowing the children out of their rooms only at night. One day a trio of servants -- elderly Mrs. Mills (Flanagan), Mr. Tuttle (Sykes), and the mute, cowering Lydia (Cassidy) -- arrive at the door, ostensibly to replace the ones who have vanished in the midst of the night months before. Not long after that, strange doings begin; doors open by themselves, voices are heard, and the many tropes of the classic British ghost tale begin to manifest themselves. It's almost as if M.R. James were scripting, or Poe -- the house could easily double for Roderick Usher's decaying manse. All that's missing is that accursed tarn. The less said about the specifics of plot here, the better -- rest assured, however, that this is far from the shrieking splatter bloody theatrics of the Scream series and its ilk. It's less gory than Edward Gorey, relying as it does on a finely crafted sense of place and time and mounting unease. That it comes as the sophomore effort from Spanish director Amenábar -- his previous film Abre Los Ojos (Open Your Eyes) was an equally affecting piece of suspense -- bodes well for the moribund old-dark-house genre. With only six major characters in a single locale, you might think the film would be sluggish, but its stately, brooding pace only serves to ratchet up the lachrymose tension to almost unbearable levels. Add to this a spare, discomfiting score and uniformly excellent performances, and you have a quiet little masterpiece of dark and chilling beauty. Shudders all around, and not a moment too soon. 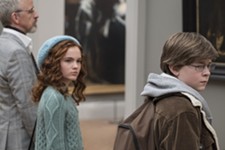