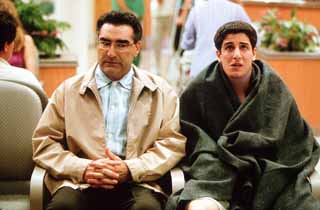 As everyone knows, it just wouldn't be summer without a teen sex farce, and this randy sequel to Paul Weitz's 1999 smash fits the bill to a T-back. Actually, it's the only thing out there right now that fits the equation: horny teens + clueless parents + skimpy bathing suits x beer = lotsa yuks. The second or third wave of the genre rolled in right around the time Wes Craven was priming the splatter pump, and that's no mistake, either. Teen slasher flicks and teen sex romps go together like Frankie & Annette and Roger Corman, but while the Scream trilogy and its ilk have fizzled out, naked girls never go out of style, as new series director Rogers (Say It Isn't So) obviously knows. Like the original, American Pie 2 is chock-full of horny lads and their wacky misadventures, which sounds pretty god-awful on the face of it, but as the original firmly proved (not to mention the work of the Farrelly Brothers), when done right, even masturbation can be zany. It's the summer following the gang's freshmen year in college and everyone's downright giddy with possibility. Former pastry manhandler Jim (Biggs); hunky jock Oz (Klein) and his best girl Heather (Suvari); generic nice guy Kevin (Nicholas) and former flame Vicky (Reid); wingnut intellectual Finch (Thomas); and perpetual testosterone plant Stifler (Scott) all end up at a bitchin' lake house scheming to get some action, baby, and trying not to get too bent out of shape when the boys run into some -- zoinks! -- sexy lesbian foxes. Jim, the de facto leader of these merry men, is achin' on the inside because his dream girl Nadia (Elizabeth) is returning to visit at the end of the summer and he's worried that, having only done the deed once before (with Alyson Hannigan's band-geek strumpet Michelle), he'll fail to impress her with his bedside manner. To even the odds, he again seeks out Michelle at the band camp across the lake to get some hands-on training. Meanwhile, back at the ranch, Stifler humps anything that moves and the ever-cool Finch prepares for what he believes to be the imminent arrival of his One True Love from the first film -- Stifler's mom (Jennifer Coolidge). To reveal any more of the very convoluted plotting would be a cheat, I think, and yes, I know it all sounds surpassingly inane, but here's the rub: American Pie 2 is as much if not more of a goofy, silly, and ultimately sweet triumph as the original. American Pie 2 ingratiates itself via some extensive belly laughs and the kind of risque humor that harkens back to Animal House and the original National Lampoon'sVacation. It offers teen hi-jinks of a higher order, and the script by writers Adam Herz and David Steinberg packs one spot-on gag after another. Much of the success of this franchise-in-the-making lies in the uniformly excellent cast. Like the teens in Amy Heckerling's seminal Fast Times at Ridgemont High, these kids ring true, obsessed as they are with sex and partying, relationships and school. It's all patently ridiculous, but it's also ridiculously fun, which is more than can be said for the majority of crass comedy calamities we've been stuck with of late. 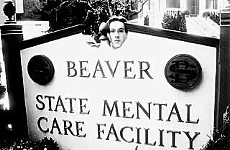 Say it Isn't So
Although the TV spots for Say It Isn't So practically demand that nonattentive viewers take note that the film is “from the makers of There's ...