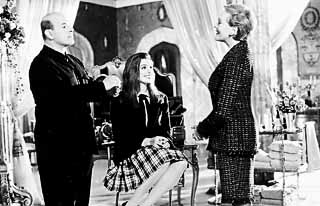 The Princess Diaries is critic-proof moviemaking, a candy pink wish-fulfillment fantasy prominently peppered with pubescent pop platters (from the likes of Hanson and BB Mak, no less) and feel-good sentiment. It's got hammerlock youth appeal even without the bit part for perky pop songstress Mandy Moore, who is permitted to sing “Stupid Cupid” and prance around in cheerleader garb acting bratty, and the most egregious candy product placement since E.T. hoovered up Reese's Pieces. Nonetheless, parents can probably appreciate the fact that this preadolescent confection boasts a G rating. (Its sauciest moment is a slightly off-color nun joke.) Yet groundbreaking cinema it's not, just in case you were wondering. For better or for worse, director Marshall has all but patented the “chick flick” formula, and he and screenwriter Gina Wendkos (whose previous credits include another ostensible empowerment fantasy, the flaccid jigglefest Coyote Ugly) follow it to the letter, with magical makeovers, a sassy best friend (indie darling Matarazzo), and eleventh-hour limousine rescues. It's Pretty Woman, sanitized for your protection and lacking that icky prostitution, right down to Elizondo, who all but reprises his role as a good-humored fairy godfather. Goofy, frizzy-haired prep-schooler Mia (Hathaway) pines for the cheeseball Big Man on Campus (Erik von Detten) and tosses her cookies in debate class. Little does she realize how special she is inside (and cute underneath her horn-rims, per Hollywood convention). Nor does she properly appreciate the Matchbox-Twenty good looks of her sensitive buddy Michael (Coppola scion Schwartzman, brother of Rushmore star Jason Schwartzman). Enter Clarice, Queen of Genovia (Andrews), who drops a bomb: Mia, her granddaughter, is heir to the throne of this tiny nation “between France and Spain” (forget what you learned in geography class about Andorra). Before you can say “Pygmalion,” Clarice is correcting Mia's schlumpy posture, unruly monobrow, and unseemly uptalk. But after she's been styled to look like Julia Roberts in miniature, can she stay true to herself? And will she have the confidence to accept the royal diadem? The script (based on Meg Cabot's popular eponymous YA novel) deserves some props for equating princessdom with power, not just glamour -- after all, ruling a country is, like, hard. It's a cozy message for young girls, even if it's couched in a predictable plot that is pure Disney. Yet while the young audience at my preview screening oohed and ahhed over Hathaway's magical makeover, the transformation seems to make her character bland -- more Seventeen and less Sassy, with the feisty Matarazzo left behind to shoulder the weight of the film's perfunctory go-girlism. On the plus side, the over-30 ensemble registers some perfectly respectable comic performances, such as a broad turn by the versatile Sandra Oh as a terse vice-principal. And it's kind of a gas to see Andrews send herself up, sniffing priggishly at a corn dog and grappling with an arm-wrestling machine. These professional performances add some extra sheen to this soap bubble of a film, but it's not nearly substantial enough to muster all-ages appeal.