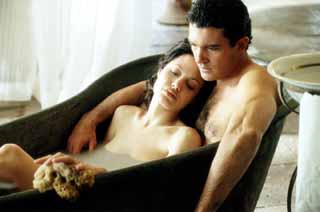 Although his name is somewhat less well-known than some of his more famous contemporaries, author Cornell Woolrich is regarded by many people as the father of noir crime fiction. Among the more than 25 films adapted from his work are such genre classics as Rear Window, Night Has a Thousand Eyes, and Deadline at Dawn (adapted for the screen by no less than Clifford Odets). Unlike the James M. Cain school of tough-guy noir, Woolrich's writing relied more on a pervading sense of sullen, sour atmosphere, with seething little passages featuring ill-at-ease characters caught up in bad fixes and worse endings. Woolrich was subtle, like the lead sap concealed in a welcoming handshake, or the dirty yellow incisors behind the little half-smile. Original Sin is taken from Woolrich's great 1947 novel Waltz Into Darkness (and has been adapted before, in 1969 by Francois Truffaut as Mississippi Mermaid) and it still has certain Woolrich touches in place. I'll go out on a limb here and offer that he probably didn't envision anyone remotely like the feral Jolie as scheming siren Julia Russell, but Antonio Banderas is altogether excellent as the Cuban java scion Louis Durand, a simple businessman who takes the ever-pouting Jolie as his mail-order bride and ends up losing his heart (and pretty much everything else) to her in the bargain. Original Sin was slated to have arrived in theatres a little under a year ago. There have been various theories as to why the holdup, but I've got to admit releasing a period love story-cum-proto-noir suspenser in any year past 1959 has got to be tough. It probably hasn't helped matters that the film's ad campaign -- what there has been of it -- has focused on Jolie's pillowy lips and heaving, bodiced bosom, intercut with a panicky-looking Banderas, which wrongly smacks of Merchant-Ivoryism. It's true that Banderas plays a coffee merchant, and if Jolie were any more achromatic and spindly she'd be in danger of being mistaken for one of the rock & roll Winter brothers, so ivory is she, but Howards End this is not. Now, The Deceivers, maybe. The script, by Cristofer, is well planned out; the movie has a nice internal rhythm that keeps being broadcast on poor Antonio Banderas' face. “She did what?! To me? Aw, geez.” he seems to say. Since the film takes place in turn-of-the-century Havana, he instead makes do with such painful, stoic, and well-mannered truisms as “You can't walk away from love.” No, but you can at least try to steer clear of women so clearly of the griftette design as Jolie's breathy conniver. Cristofer does a much better job here, at any rate, than he did adapting Tom Wolfe's Bonfire of the Vanities, or one even less sensible, The Witches of Eastwick. Original Sin holds up fine as a Woolrich pastiche; it retains much of the author's beloved atmospherics, and if you can swallow some of the more overripe dialogue -- not to mention an extended and oddly edited lovemaking scene that seems to want to do Bob Guccione one better -- it's not nearly as mediocre a two hours as the trailers would have you think. 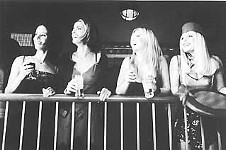 Body Shots
“Sex without love equals violence.” That's the bleak thesis lashing around at the bottom of this murky feature, an indictment of frat-boy hedonism in which ...