Trade in Dustin Hoffman's red spangly Tootsie dress for Daniel Auteuil's leather chaps and condom beanie-hat, and you've got the basic idea of this French comedy import: Man undergoes dramatic lifestyle change in order to hold onto a job. Dustin Hoffman's embattled actor became a woman in order to land more gigs; upon hearing his dismissal is imminent, Daniel Auteuil's sad sack François Pignon comes out of the closet -- even though he's not gay -- knowing full well his bosses at the rubber plant will think twice before canning his newly outed self. The Closet scores most of its points from leading man and legend Auteuil, France's kissing cousin to our Al Pacino or Robert De Niro. Here, he is just as good as in his seminal turns in Manon of the Spring and Un Coeur en Hiver, shrinking into himself to become the remarkably unremarkable Pignon, a man universally regarded as a “drag,” who only begins to take chances and truly live when he takes on a lie. Joining him, like a bull in Auteuil's china shop of subtlety, is that grande dame of Epic Overacting, Gerard Depardieu (Green Card, Cyrano de Bergerac). He plays Félix Santini, a boorish, brashly homophobic coworker who is advised -- in the factory's new world order of political sensitivity -- to befriend Pignon and shake his gay-bashing reputation. Although the idea of cozying up to a “fruit” -- one of the less offensive sexual and racial slurs that slip off his tongue like a slick-backed minnow -- Félix lumbers forth. (The beefy and ever more beefing Depardieu can't seem to do anything without lumbering, hulking, or thundering his way there.) So zealous in his attempts to befriend Pignon, he wines and dines him, buys him chocolates and a pink cashmere crewneck, actually falls in love with him, and eventually cracks up when Pignon rebuffs him. Does it read as unbelievably as it plays on screen? Auteuil and Depardieu have very little actual screentime together, so the camera jerks disruptively from each actor's storyline: Felix's unraveling from ballbuster to hopeless romantic, and Pignon's rebirthing from “drag” to fab. (Apparently, all one has to do is circulate photos of oneself in black leather ass-pants and -- voila! -- instant fan club.) But the breaking up of their screentime means few opportunities for comic foiling between two of France's most revered actors. Truth be told, there isn't much comic, period, to be found in The Closet, just limp flailings played on played-out gay jokes. The real focus, it seems, is as a sort of “The Rules” for dullards: how to sparkle up a lackluster life and become the life of the party! Writer-director Francis Veber has had success in the past with comedies; 1998's The Dinner Game was a commercial and critical success (and featured another loser named François Pignon). But then he's also the man who wrote the aggressively unfunny Father's Day and the “only the French!”-creepy My Father the Hero. The Closet settles somewhere in between those extremes. It doesn't have the bite to be satire, the pratfalls to be broad comedy, or the wit to pass as a comedy of manners. What does that leave? The French cinematic equivalent of motivational coaching, and -- just like Pignon -- something spectacularly unspectacular. 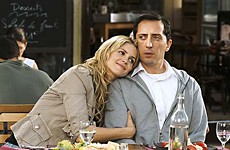 The Valet
This flat French farce has a couple of likable characters, one or two decent jokes, and a lot of missed opportunities.