Frequently underrated, Robin and Marian is a revisionist telling of the familiar tale with the famous couple seen in middle age and abundantly self-aware. If nothing else, the performances of Connery and Hepburn are welcome delights. 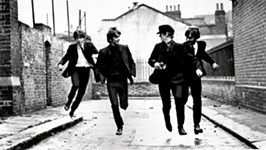 A Hard Day's Night
This is the kind of timeless artifact that, decades after its making, still hits the senses like a burst of fresh air. Where a pop star like Elvis churned out silly movies with phony plots, props, and pretense, the Beatles launched into movies playing hyperbolic versions of themselves and their lives of newfound celebrity.