Former Disney Chairman Joe Roth takes the directing helm with this bitchy romantic comedy, and wouldn't you know it, it's better than half the chipper fare out there these days. Admittedly, that's not saying much, but America's Sweethearts surges ahead of the pack by dint of its snarky, spot-on performances and a willingness to play up the obvious ridiculousness of so many Hollywood romantic pairings. With tongue firmly ensconced in cheek, the film, in effect, confirms all those suspicions we've had about the dubious nature of so many superstar couples. Hardly a surprise, I'll grant you, but the script (by Billy Crystal and Peter Tolan, late of The Garry Shandling Show) is crisp and fresh, the gags well-aimed and nastily barbed. Take that, you phony. Crystal plays studio press agent Lee, who is pressed into service by his ex-boss Mr. Kingman (Tucci) when Kingman Studios' newest film -- a futuristic thriller called Time Over Time -- goes missing days before the press premiere is scheduled. The film's director, Hal Weidman (Walken), is a lanky, bedraggled mess -- and the film, what there is of it, is nowhere to be found. On top of this disaster, the film's romantic leads, Gwen Harrison (Zeta-Jones) and Eddie Thomas (Cusack) have recently split up in real life, sending the depressed and manic Eddie to a new-agey retreat lorded over by a very funny Arkin (channeling Deepak Chopra, it appears) while Gwen shacks up with her co-star Hector (Azaria, referred to by all as “the Spaniard”). Lee's mission: Get the pair of them together again, on a press junket, and hope that the media don't notice that there's no film as of yet. Easier said than done, of course, but the gung-ho press agent, with lackey Danny (Green) in tow, conspires to rope the two into a Las Vegas junket with the help of Gwen's sister/publicist Kiki (Roberts), who, in a twist that's less of a surprise than a given, begins to fall for Eddie, and vice versa. Looking over the synopsis, it admittedly doesn't sound like much, but given the caliber of talent involved here America's Sweethearts can't help but nail some big laughs. Cusack in particular is terrific, although, as my girlfriend noted post-screening, it's essentially the same jilted lover role that he's been playing since Say Anything. Hey, if it works ... It's getting redundant to say that Roberts is an astonishing comic actress, nimbly treading the line between yuks and pathos, but there it is, another giggly, grinning, excellent performance. Roth wisely buoys the film's weightier moments (and by weighty I mean marginally more than feather-light) with a deuce of goofy comic turns from both Arkin and Walken, two actors who, frankly, can do no wrong. Hank Azaria, too, is howlingly funny as an Antonio Banderas-esque egomaniac-cum-Latin lover, slobbering his lines with a thick “ch-“ for everything requiring a “sh-.” Silly, yes, but funny nonetheless. At its heart the film wants nothing more than to make you giggle, and at that it succeeds admirably. Romantic comedies often get short shrift during the summer's action-oriented months, so it's nice to see one come out of the gate as strong as this. And anything that parodies junket whores with as savage an eye as this is welcome in my book anytime. 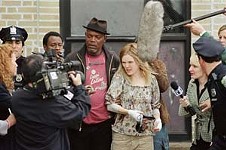 Freedomland
This Richard Price story about simmering racial tension that boils over during the course of a police investigation is choppy and erratic. 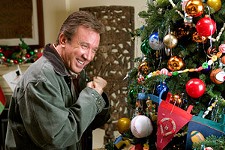 Christmas With the Kranks
Holiday pap and circumstance.