Prep school girls in knee socks … and nothing else! Lost and Delirious could have come off like a fetishist's fantasy or the stuff of late-night scrambled porn. That at least would have been more rousing than this embarrassingly earnest trip into teenage lovesick delusion. Tough girl Paulie (Perabo, of Coyote Ugly) and sweet, slightly vacant Tory (Paré) are best friends, roommates, and lovers at an all-girl Canadian boarding school. Their illicit love gets shaken up a bit when new roommate Mary “Mouse” Bradford (Barton) moves in … but not enough to discourage Tory and Paulie from jumping in bed naked every night and simply giggling when Mary stares at them bewildered come morning. (According to Mary's voiceover narration, the sounds of their lovemaking eventually become like second nature to her, a comfort; maybe I'm old-fashioned, but I found little comfort in one of my college roommate's sexing it up five feet from my bed.) There's just too much giggling going on between the girls, so you know something bad's bound to happen, and it does: One morning some students burst into the girls' bedroom, busting Tory and Paulie in bed together. Fearing her conservative parents' disapproval, Tory makes excuses about her relationship with Paulie, telling everyone that Paulie is obsessed with her (how this explains Tory's similarly naked state is not addressed). She cuts of all relations (sexual and friendly-like) with Paulie, and the result is devastating. Paulie basically goes off her rocker, although she does so in such an elaborate, stagy manner I never once bought her pain. There's nothing authentic about Perabo's performance; to her dubious credit, she does supply the most unintentionally gut-busting lines in a script chock-full of turkeys basted in hokum. The impossibly beautiful Paré -- seen mostly in French-Canadian productions -- is slightly more compelling as the confused, conflicted Tory, but her character takes a way-back backseat to Paulie's histrionics. And it's damned frustrating, all of it, as there's an interesting kernel here (the script, by Judith Thompson, is based on Susan Swan's novel The Wives of Bath). But the filmmakers ask all the wrong questions. There's no exploration of the girls' relationship to their sexuality: once or twice, they both fervently deny they are lesbians, going so far as to call it weird, but it isn't investigated much further than that. Nor is Paulie's assumption of a “butch” identity: As Tory pushes her away, Paulie subtly transforms herself into something more masculine, and she challenges Tory's new boyfriend to a duel. These ideas are vastly more gripping than just another shot of Tory looking doe-eyed and forlorn, Paulie looking insane, or the superfluous Mouse looking meek (the character, while played adequately by Barton, is inessential). The film is heavy-handed and ponderous, without challenging itself or the viewers. (I will refrain from addressing the ridiculous use of a broken-winged hawk that functions as a metaphor for … hell, who even cares, it's just irritating.) Ultimately, Lost and Delirious isn't much more than a self-indulgent picture about the feeble delirium of a lovesick girl -- lightweight stuff that labors to seem terribly important. I'd rather it were some of that scrambled porn. At least skin flicks don't take themselves quite as seriously. 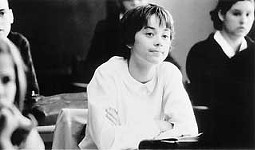 Set Me Free
French-Canadian writer-director Léa Pool's Set Me Free (Emporte-Moi) is a coming-of-age film that stands apart from the average genre formulations that have become such popular ...