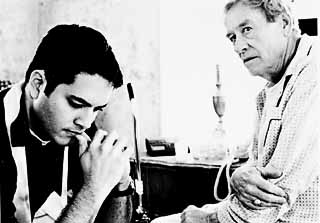 No, it's not a documentary explaining everything you need to know about the recent, and seemingly inexplicable, boy-band phenomenon. Instead, Boys to Men is a compilation of four short films by different directors that have been grouped together by their common theme of gay identity. These four favorites from the gay film festival circuit have now been packaged for theatrical distribution by distributor Jour de Fête Films, although it is doubtful whether this feature program will attract much audience beyond already gay-identified viewers. As a whole, the appeal of Boys to Men has more to do with its uncommon subject matter than with its original cinematic qualities. Each of these films has something decidedly interesting to say about the never-ending process of growing up gay. None, however, uses mechanical or narrative techniques that can be described as anything more than pedestrian or scholastic. Such strategies are unlikely to reel in anyone apart from the already curious, which in itself is not a bad thing -- it's just that these shorts are interesting enough to earn universal appeal if their inadequacies weren't so pronounced. “Crush” by Philip Bartell is the first film in the program and it's also the most popular festival honoree in the lot (it won an audience award at the Austin International Gay & Lesbian Film Festival). It's a sweet story about teenage crushes. Girl digs boy, but boy digs boy, so what's a teenager in love to do? “Crush” takes a 12-year-old straight girl whose love object is a gay but sexually tentative 16-year-old boy. But her desire to forge a friendship anyway leads them both into unexpected realms. “The Mountain King” by Duncan Tucker concerns a young man's idyll with a hustler on the beach and some kind of personal transference that occurs. It's the least interesting and accomplished film in the group. On the other hand, “…lost” by Dan Castle has a distinct point of view and something it wants to express about the world of drugs, anonymous and unsafe sex, and HIV. It's something of a morality tale, although delivered in a spry and winning fashion. The last short, “The Confession” by Carl Phirman, is also the best and most provocative of the bunch. It deals with the psychological issues faced by a dying man, who struggles during his final days with a deep-seated longing for acceptance by the Catholic Church despite the contradictions that poses to his 35-year-long relationship with his nursemaid/partner. It's a story that tackles not only issues of gay identity but also the inconsistencies and turmoil brought about in the name of religion. The four films follow each other in the same order as the human life cycle: youth, adulthood, and old age. In this, Boys to Men makes a case for issues of gay identity being part of an ongoing life process.