Before Scary Movie 2 is through, Chris Elliott dry-humps a turkey, David Cross fellates himself, and James Woods vomits projectilely and repeatedly. By the time it's over, you may find yourself feeling something like that poor prop turkey -- humped, abused, and discarded. Viewers of Scary Movie 2, however, are certainly willing participants. The ads trumpet the movie's crass intentions. The original's ad campaign misled us by promising, “No Mercy. No Shame. No Sequel.” But after soaring into blockbuster history with a $260 million take, the esteemed producers at Dimension Films (the action-movie arm of mini-major distributor Miramax Films) fired up the inexhaustible Team Wayans for a parodic redux -- or something along those lines. Goofing on other movies -- especially horror movies -- is what the whole Scary Movie juggernaut is about. And, inevitably, the sequel scores a couple of decent laughs at the expense of some popular horror riffs. But Scary Movie 2 doesn't limit itself to horror. Everything in the popular media is fair game -- from NBA commercials to The Weakest Link to Dude, Where's My Car? and Charlie's Angels (the movie). In fact, this sequel, which was completed in what seemed like a mere few hours before its release into theatres, capitalizes on its contemporaneity by including jokes about things like Firestone tires and last February's Hannibal. These jokes are not necessarily funny, but their up-to-the-minute currency can easily be mistaken for insight when it is really little more than fast-fingered pilfering. Scary Movie 2 is not interested in telling us a story; it is instead designed as a nonstop gagfest (interpret that term however you please). It opens with a spoof of The Exorcist that, aside from having absolutely nothing to do with the rest of the movie, may offer the best, and most sustained, minutes of the film. Despite the reprisal of many original characters from the first Scary Movie, this sequel's not otherwise big on continuity. The whole thing reeks of sequelitis, with an emphasis on the rude and crude. If it were funny that might be one thing, but I get the feeling the only ones really laughing are the Wayans clan -- and Marlon Brando, who was cast in Scary Movie 2 but bailed (due to illness) before it came time for him to shoot. 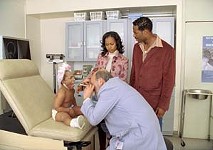 Little Man
If you can accept the very idea of Shawn Wayans’ face on the body of an infantilized baby-man in diapers, who’s to care about the quality of anything else in the movie? 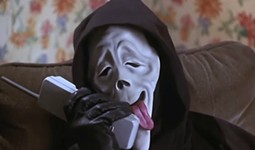