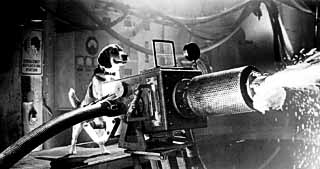 The idea behind Cats & Dogs is such an obvious one it's a wonder no one's thought of it before. In the film's clever and virtually irrefutable logic, the two species have been in a bitter cold war for eons, vying for the affections and laps of mankind, beginning all the way back in ancient Egypt, where it was the felines who ruled over the humans with an iron paw and not the other way around. That makes sense when you think of all those aloof, Byzantine cat gods like Bast and her ilk, forcing tummy rubs on the poor bipeds. Guterman, who previously worked on Antz, sides squarely with the dogs from scene one. When the Brodys -- a suburban everyfamily with a nutty professor dad (Goldblum), harried realtor mom (Perkins), and soccer-mad son Scott (Pollock) -- find their beloved bloodhound missing, they assume he's run off for good and Mrs. Brody promptly goes out and secures a fresh new beagle pup for her heartsick son. (Whether this is the right thing to do in real-world dog-gone cases is anyone's guess, but in the fictional world of Cats & Dogs that's the way things go.) Unbeknownst to the Brodys, however, their dog has actually been dognapped by a squad of felines in an unmarked van. This is only the current skirmish in an old, old war, but things kick into high gear when Scott's new pup Lou (short for Loser and voiced by Maguire) is recruited by the agents at Dog Central to secure the Brody household from a suspected feline home invasion. The cats -- led by the conniving furball Mr. Tinkles (Hayes) -- have gotten wind of Professor Brody's experiments in defeating human allergies to dogs. Such a discovery would give the dogs the upper hand in the battle, and the cats, schemers that they are, will stop at nothing to thwart it. From here on out it's a race against time as the dogs -- tough guy Butch (Baldwin) and his ex-paramour Ivy (Sarandon), sheepdog Sam (Clark), and fidgety tech-happy mongrel Peek (Pantoliano) -- duke it out with the cats for racial superiority and the affections of humankind. Cats & Dogs never quite jells the way, say, Babe did -- it's all one blur of motion and fur, with Guterman only slowing things down a tad for the requisite touching scene between a boy and his dog. Still, when the film is firing on all four-legged cylinders it's hard not to crack a smile and admit that deep down inside maybe this isn't so much fiction. The CG effects are well done, with Mr. Tinkles being the chief beneficiary: He looks like he just hopped out of the lap of Gerte Frobe or perhaps Dr. Evil. Not surprisingly, the two-legged cast members are given precious little to do besides react with shock at all the suddenly loquacious animals. It's tempting to view Goldblum's goofy scientist as a dumbed-down version of his Seth Brundle character from The Fly, but probably only for me. The main draw is surely those zany talking pets, and frankly, who can resist a feline-ninja-airborne-attack squad parachuting out of the night sky? Hey, not me, and I'm a dog guy through and through. Inoffensive fun that kids will love and adults will likely love too, it's a middle of the road affair, but a far cry from roadkill. 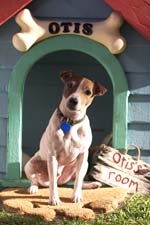 Son of the Mask
Sequel has absolutely none of its predecessor’s manic charm.