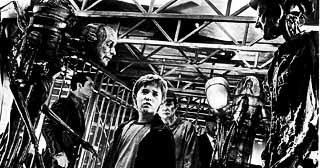 There's nothing more frustrating than a posthumous work from your favorite filmmaker that doesn't quite live up to expectations. In this case it's Stanley Kubrick, who had been working on A.I. for over a decade before his death. Unable to figure out what, exactly, to do with the intriguing storyline from Brian Aldiss' story “Supertoys Last All Summer Long,” Kubrick passed it off to Spielberg, who originally declined to helm the project, only to reverse his opinion once Kubrick died. That's not important, or not very important, anyway. What is of note is the fact that what we're left with – Kubrick or no – is a muddled, messy disaster of a film, something that seems more like a drastically edited miniseries, cut down to incomprehensible levels with whole sections missing. You may wonder what's going on more that once. You're not alone. Osment (of The Sixth Sense) plays a prototype child robot – David is his name – sometime in the future, after the polar ice caps have melted and deluged much of the global coastline. Robots – or “mechas” – we're told, have come into fashion since the great cataclysm. Every home has one, or two, or more, but it's up to Professor Hobby (an underutilized Hurt) to break the mold by designing the very first robot child, one who can feel emotions such as love. David is offered as a test case to Monica and Henry (O'Connor and Robards), a young couple who have lost – or nearly lost – their young boy to illness (he's in cryogenic animation). It's here, in the first part of A.I., that the film really sings. Monica is torn between grieving for her long-gone son and expressing emotion for the pre-programmed David, and O'Connor pulls out all the stops in a subtle, chilly way. While her husband seems bent on taking this corporate opportunity by the horns (he works for Hurt's robotics company), she can barely bring herself to address this odd, new addition to the family without a shiver. And when her real-life son is revived from his suspended animation, things can only get worse. Some of the most interesting things about this deeply flawed film occur in these early sections. When Monica sends David back to his (literal) maker – or nearly so – she sets in motion a surrealistic sci-fi chain of events that doubtless read better in Aldiss' original that in plays onscreen. She's already read Pinocchio to David, who promptly takes it to heart, Blue Fairy and all. The second part of Spielberg's film (and make no mistake about it, this is a film with several, very distinct, sections) follows David's quest to become a real, human boy, while in the company of Jude Law's sex robot Gigolo Joe. The pair hook up and join forces in a way so vague it passes from memory in less than 24 hours. There's much about A.I. that feels weak and cobbled together. A “flesh fair” where robots are slaughtered in a pro-wrestling-style arena by angry “organics” makes less than no sense, and the film's treatment of story logic and plot points that ought to be obvious (and are completely necessary to one's enjoyment of the film) are utterly absent, or quickly glossed over. Osment, to his credit, is engaging in the early, pre-emotion scenes, as are O'Connor and Robards, but good acting – what there is of it – isn't enough to save this ambitious wreck of a film. Frequently distressing and almost always off-base (you can't help thinking what could have been, and wasn't), A.I. makes Eyes Wide Shut seem even more like a fitting, Kubrickian epitaph.