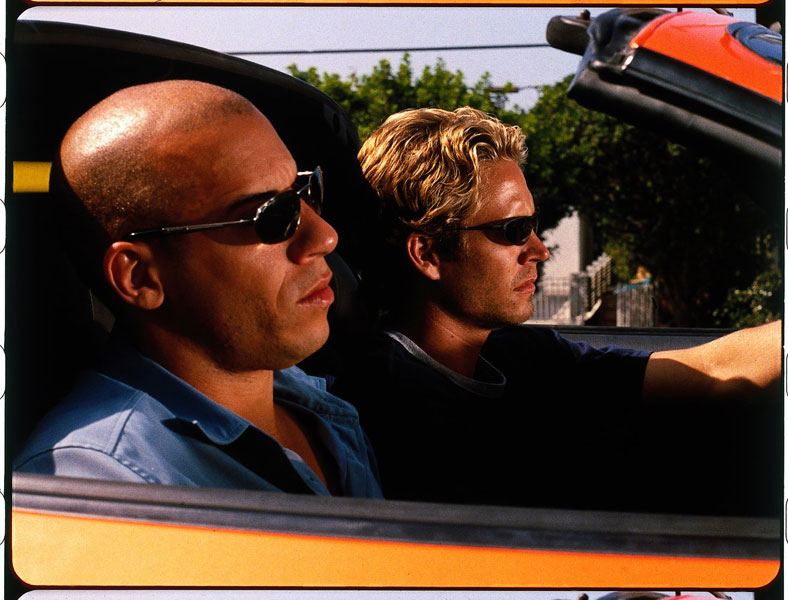 The Fast and the Furious has cult movie scrawled all over it. From top to bottom it's pure, unadulterated teen exploitation filmmaking at its best -- a heady, rocketing blast of fast cars, loud hip-hop, and a script so cheesy it might as well have “Made in Wisconsin” stamped on it. The plot, courtesy of screenwriter Gary Scott Thompson (Hollow Man), is a flimsy thing from which all manner of automobile wipeouts can be hung, but this is one film in which having a plot that conforms to some sort of internal logic doesn't really matter all that much: It's all about the cars. Walker plays Brian Spindler, an L.A. cop working undercover to crack a gang of highway thieves who are using their street-racing skills (and their chopped and dropped Hondas, complete with matching green glows that emanate from their undercarriages) to waylay big-rig drivers hauling shiploads of pricey electronics. Brian hooks up with the gravel-voiced Dominic Toretto (Vin Diesel of Saving Private Ryan), the leader of a group of illegal racing enthusiasts who nightly turn the back streets of South Central Los Angeles into their own private Indy 500. As Brian tries to gather some sort of evidence so that his boss (Levine) can make a bust, he finds himself increasingly sucked into the macho camaraderie of the very people he's surveilling. It wouldn't be an exploitation film with some sort of forbidden love, of course, and here it's Jordana Brewster as Dominic's sister Mia. Brian and Mia make googly eyes over the Hooker Headers on Dom's cherry '69 Dodge Charger and the next thing you know they're courting at 110mph. Now that's love. Meanwhile back at the garage (whose garage, exactly, I'm not sure), an Asian biker gang straight out of Akira, and led by the chatty Johnny Tran (Yune), has a score to settle with Dominic and new pal Brian. The plot, ultimately, is less tangible than exhaust vapors. The cars, on the other hand, and the racing sequences they're involved in, are things of sleek, shark-like beauty. Mitsubishi Eclipses, Toyota Supra Turbos, and unmentionably cool Tokyo Steel jostle for position not only at the starting line but also in your head (which will, I guarantee it, be ringing -- this is hands down the single loudest film I have ever seen). Gearhead culture's fetishism of the mighty manifold is as old as cars themselves, but The Fast and the Furious goes it one better thanks to some new camera-mounting technology that allows the cars to be filmed at upward of 80mph (previously, a decent 35mph was all most traditional car-mounted cameras could safely handle). So that's the Fast. The Furious comes from Diesel, whose bald pate and hulking chassis make him seem something of a runaway Hemicuda himself. The Fast and the Furious puts the lie to wannabe also-rans like Driven and Gone in 60 Seconds -- it's got the goods for real, and it delivers them wrapped in a shroud of speed and wild-eyed, hi-test fun.