It's no small understatement to say that Atlantis: The Lost Empire isn't your average all-ages popcorn pusher. The in-betweeners and cleanup artists alone could populate an underwater city. At best, it's a brisk, old-school adventure yarn, unencumbered by Disney's usual bedevilments -- smirking showbiz in-jokes, Oscar-fodder musical numbers, and preachy lessons. Lest one fail to appreciate the lofty aspirations of the filmmakers, we begin with an epigraph from Plato and a scene of dialogue in Atlantean (with English subtitles for the kiddies). It's even got a brainy hero: the unsinkable Milo Thatch (Fox), a geek in knee breeches who's bumbling and a bit prissy, derided and banished to a museum basement for his obsession with discovering the Shepherd's Journal, a supposed firsthand account of life in Atlantis. Enter a quixotic zillionaire (Mahoney) who proffers the journal and a ready-made expedition to the lost city. Virtually one screen wipe later, Milo is descending through the deep with the crew of a submarine-block-jawed commander (Garner), femme fatale lieutenant (Claudia Christian), sassy teenage mechanic (Obradors), jovial medical officer (Phil Morris), blasé pyromaniac (Novello -- yes, Father Guido Sarducci), and a geologist with a dirt fetish and seething Peter Lorre accent (Corey Burton). The oddball crew lends the story a band-of-brothers bonhomie without quite drowning it in that wacky “sidekick” humor. But the thrust of the film is its visual style, a mix of panoramic, stunningly photorealistic undersea backgrounds, stylized character animations (which owe less to the wide-eyed waifs of the classic Disney style than the edgy, squared look of anime characters, particularly for the villains), and production design that evokes the purposely vague, industrial-era setting, equal parts steampunk and Jules Verne. Of particular note are the leviathan, a massive mechanical sea beast, and an elaborate zeppelin with every gear drawn in loving detail. But the eye candy can't quite compensate for the murky mess of a plot, credited to screenwriter Tab Murphy and a committee of story writers (sadly, Buffy creator Joss Whedon is somehow among them). After a zippy first act, the movie bogs down in muzzy details. It's not giving too much away to say that the crew reaches Atlantis, nor to reveal that the citizens are bland, beatific noble savages with loincloths and platinum-blond topknots, all engaging in New-Agey crystal worship (it is Atlantis, after all). As the Yoda-like Atlantean king, Nimoy tosses off fortune-cookie epigrams; though his daughter (Summer) is a generic Disney exotic in tube top and sarong, at least she doesn't sing. And you don't have to be the world's biggest cynic to chafe at the self-consciously multi-culti crew -- nor to wonder why, if the Atlanteans are so advanced, they have to be taught to use their own technology by a smarty-pants American. 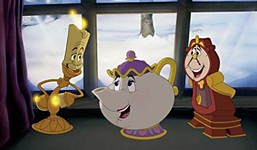 Beauty and the Beast
The Disney classic returns to theatres with a 3-D update.