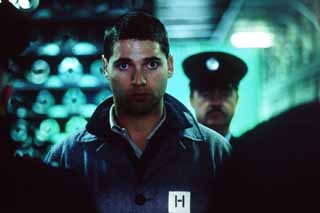 Mad-dog killer, bestselling author, and seemingly endless source of fascination for the people of Australia, Mark Brandon “Chopper” Read is the kind of renegade tough about whom legends -- and now a film -- are made. He's a real-life homicidal thug, a sort of manic media meme run horribly amok, with a penchant for fabricating his own mythos out of whole cloth and then selling it back to the very citizens he had before wronged. Like the cyber-killer SID 6.7 played by fellow Aussie Russell Crowe in Virtuosity, this Chopper fellow seems to have been borne of a public need for ultraviolence, tempered, in this case, with a pub-rock wit and plenty of jailhouse tattoos. Although Dominik's film takes pains to point out that this isn't exactly a “true” story, it's apparently close enough to have made the film a smash in not only its native country but elsewhere as well. Which puzzles me, since if the real Chopper is anywhere near as predictable and straight-line dull as his filmed counterpart, it's a wonder anyone's bothered to take note. This isn't to say the film is wholly without merit; with an engaging, borderline unnerving performance from twinkle-eyed Aussie comic Eric Bana as Chopper and a handful of shockingly violent outbursts, there's enough here to keep an audience focused on the mayhem at hand. The story, though, is surprisingly unfulfilling. The film opens with twentysomething Chopper watching himself on TV while taking time out from brutal killings in prison. Boasting that he's killed 19-plus people -- all of them “drug dealers, scum, and what's wrong with that?” -- he seems entirely at ease with his self-created lot. It's only later that we realize that Chopper is such a boiling, hair-trigger psychopath that his own best mates try to kill him. That scene, in which pal Jimmy (Lyndon) repeatedly punches a jailhouse shiv into Chopper's unflinching chest, over and over, to absolutely no effect, is simultaneously harrowing, disgusting, and laugh-out-loud funny. Chopper's take on the whole incident -- indeed, his whole life, it seems -- is to sit back, have a smoke, and wonder what all the fuss is about. Even lying on the cellblock floor with blood streaming from his body, he seems utterly unflappable. The film's other chief conceit, which comes into play after an older, pudgier Chopper is released from prison, has to do with his slippery grip on reality. Dominik uses accelerated, hypnotic camera tricks to suggest that this is a creature who's only barely on nodding terms with the real world. Chopper's prone to sticking a loaded gun into a friend's mouth one moment and then apologizing profusely, like an errant schoolboy, the next. Apparently, this sort of manic-depressive schizophrenia has won the real Chopper Read a following down under, though why that is is never made entirely clear. Dominik's film doesn't portray this lunatic as a sympathetic character; he's more like an alien being, just arrived from planet Thug Life, here to inject a little chaos into ordinary society. Ultimately, Chopper's just another pathetic, fast-fisted hooligan with a gift for gab. Dominik's film, ambitiously mediocre, echoes that, and you wonder why anyone even bothered. 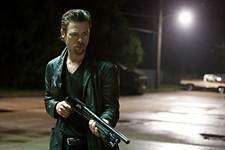 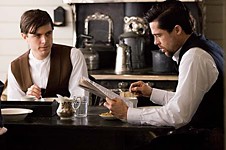