About the best you can say regarding this inoffensive Schneider vehicle is, hey, it could have been worse. Come to think of it, in today's comedy market, where bodily fluids and flatulence rule and The Animal's parent company Sony is creating yes-men critics out of whole cloth, this movie could have been a lot worse. Compared with some of its clunky, obnoxious forebears, it's pretty tame stuff, and Schneider, a comic not known for his subtlety, actually pulls off a kind of good-natured sweetness with his character Marvin Mange, a police evidence clerk who just can't seem to get things right. Until, that is, he dies in a horrifically over-the-top car crash and has his body reassembled by mad Dr. Wilder (Caton), who stitches in a veritable zoo of animal castoffs in a “radical trans-species-ectomy.” Alive again, and back on the job, Marvin finds that he now possesses the various natural talents of his new innards -- he begins to hump mailboxes, sniff out heroin secreted in criminals' backsides, swims like a seal, runs like a cheetah, and so on. Initially, Marvin mistakenly believes it's all a beneficial side effect of all that badger milk he's been drinking, but no, finally, it's the animal within the nebbish come to the fore. Colleen Haskell, late of the first season of Survivor, gets her first major film role as Marvin's love interest Rianna, a squeaky-clean, perky PETA-person, who's at once drawn to and repulsed by this face-licking schmo and his animalistic tendencies. There are precious few instances in The Animal where you're unsure of what comes next -- much of the problem stems from the television trailers that have neatly catalogued the comic payoffs for viewers long before they arrive at the theatre, but screenwriter Tom Brady -- who briefly wrote for Schneider's failed TV show Men Behaving Badly -- hasn't exactly contributed much in the way of surprises, either. What works about The Animal is the fact that, in contrast to so many of the other comedies out there these days, it's a relatively tame affair, far less repugnant than hideous fare such as the recent Tomcats, and without the often annoying smirk of SNL cohort Adam Sandler's films. Debuting director Greenfield keeps things moving swiftly, from gag to gag, without pausing for breath in between, and those allegedly tender moments between Haskell and Schneider carry a silly sensibility. With his receding white-guy afro and hangdog eyes, Schneider looks like a whipped puppy half the time, which only serves to illuminate the inner turmoil when he starts getting randy around females of all species. The Animal is hardly a comic masterpiece -- the jokes are awfully broad and obvious -- but I couldn't help feeling relieved at the film's absence of malice. It ain't much, but it's better than a poke in the eye with a sharp stick. 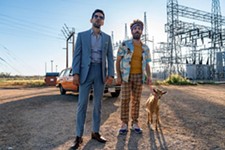