It may be hard to be a saint in the city, but it's even more difficult to be a woman in Tehran, as evidenced by this disturbing but well-crafted film by Jafar Panahi (The White Balloon). That women are oppressed under the Mullahs is hardly a revelation. What is revelatory about The Circle is just how world-weary these women are, barely able to draw their black chadors around themselves, cloaking their femininity and effectively sealing themselves off from the leering patriarchy that they've found themselves born into. Literally, The Circle opens with the sound of agony. In a hospital, a woman is giving birth while her mother paces outside the delivery-room door. When the nurse slides back the door's oblong peephole -- it looks less like a hospital door than that of a prison -- and reveals that, despite a previous ultrasound that said differently, the new arrival is a girl. The grandmother is horrified. She knows that in Tehran's male-dominated society a female newborn is destined to a life of subjugation, or worse. It's a bizarre, awful reaction to attach to a birth and it colors the rest of Panahi's film. The Circle doesn't have much of a conventional plot. It's much more a series of small segments. Panahi's camera, hand-held and jittery, moves out of the hospital into the street, where two chador-clad women are waiting for a bus. They are Arezou (Almani) and Nargess (Mamizadeh), recently released from prison on a day pass and eagerly planning a more permanent escape. What they did to land in the fearsome Tehranian penal system is never explained, though in the end it doesn't matter. Nargess hopes to return to the small village of her birth, and Arezou attempts to help her, though almost immediately there is a scuffle when a passing male stranger mutters a half-heard epithet at Arezou, who immediately begins shrieking at the man. It's almost certainly the wrong course of action to take, but it only reinforces the feeling that this sort of single-sided sexual harassment is part and parcel of female life in Tehran (if not Iran as a whole). Panahi then moves on to focus his gaze on Pari (Orfani), a young woman whose husband has been executed by the state and desperately seeks an abortion; she goes to visit with another former inmate, now a nurse, who turns her away, fearful of what might happen if her physician husband were to discover her “criminal” past. Pari heads out onto the streets of Iran -- Panahi shoots everything in too-bright, sunlit tones, and you can practically taste the gritty Tehran dust in your mouth -- and immediately encounters an impoverished woman abandoning her little girl to the street. The camera moves on: By the end of the film it has returned to the maternity ward of the opening scene. Grim, yes, but the women Panahi shows us (many of the actors are not professionals) display an inner core not only of state-mandated solitude, but also fierce strength. Forced by circumstance into a second-class citizenship, they fight for each other in tiny, often futile, ways. There's no denying it's a tragic film from start to finish, but equally undeniable is the endless stoicism displayed by the women, and Panahi's crisp, meandering direction. 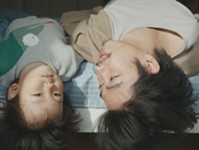 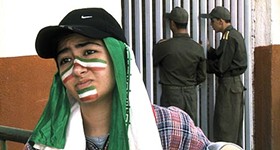 Offside
Deeply immersive, thought-provoking, and quite often funny, Offside depicts the resourcefulness women in Iran must rely on in order to enter a stadium to watch, no less play, soccer.