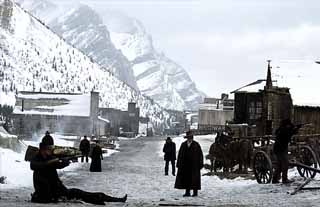 The Claim trafficks in a particular brand of pain: a huge, bone-crushing, mute melancholy, like when you open your mouth in a dream to scream and nothing comes out. The characters in The Claim suffer under the weight of very big things -- betrayal, abandonment, disease, death -- but they do so quietly, stoically, until, by God, they just can't take it anymore. Based loosely on Thomas Hardy's The Mayor of Casterbridge, director Michael Winterbottom transposes the book to 1860s Gold Rush California. In drunken desperation, a young man named Dillon (Mullan) trades his wife Elena (Kinski) and infant daughter for the claim to a gold mine. He becomes wealthy beyond his dreams and builds a town called Kingdom Come. Twenty years later, the abandoned Elena and her grown daughter, Hope (Polley), arrive in town. The wife, sick with consumption, hopes to convince Daniel Dillon to provide for Hope after she's gone; she tells Hope that Dillon is her rich uncle. Rolling into town at the same time is the Great Pacific Railroad Company and its affable chief surveyor, Dalglish (American Beauty's Wes Bentley). The first railroad to ever be built will connect the two coasts, and the fate of a town is determined by whether or not the railroad passes through it. The survey team arrives in Kingdom Come to determine if it's a suitable passage for the train (and ultimately, whether the town will survive). It's a lot to cram into two hours, but Winterbottom does so gracefully. Each storyline interconnects with another, so by the end, everyone's fate is so wrapped up in everyone else's so messily that you know nothing but disaster can come of it all. The landscape -- snowy and endless -- coupled with Michael Nyman's haunting, romantic film score (which recalls his work for The Piano maybe a little too much) add to the sense of impending doom. However, Winterbottom's film isn't just one big wet blanket: Throughout, there's a sense of humor and a celebration of life and of love, even if you know it's all going to end badly. Polley and Bentley, two intriguing young actors, do nice jobs as Hope and Dalglish, who begin a tentative courtship despite the obvious conflicts of interest. (Though Bentley, in his winter cap and Navy pea coat, feels more like he's just sprung from the pages of J. Crew than the 19th-century life of a railroad man.) But the truly astonishing performances belong to Mullan, as Dillon, a man wracked with grief and regret, and Milla Jovovich, who plays a brothel owner and Dillon's lover. In a moment of giggling lovemaking, he accidentally rolls over her hair and she cries out, partly in pain, partly in pleasure, “You're hurting me!” It's the battle cry of everyone in The Claim -- albeit a whispered one -- pleasure plus pain, an unbelievable pain, executed by the hands of those most loved.