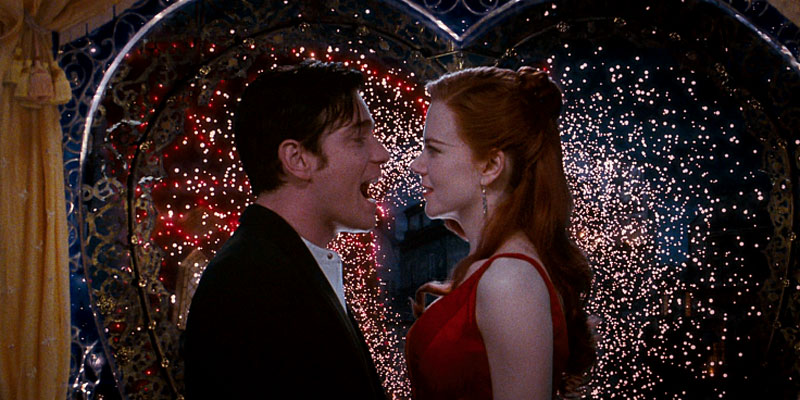 For the first 15 or so minutes of Luhrmann's monumentally over-the-top attempt to bring back the moribund genre of the Hollywood musical, I wasn't even sure I could bring myself to stay seated. So chaotic is the film's opening that the fight or flight instinct is critically engaged; for a moment there, adrenals aflutter, I wanted to run, and you may, too. Don't. Despite the film's rabidly excessive stylistics (or perhaps because of them), Moulin Rouge eventually sucks you in with its own brand of willful illogic and breathtaking visuals. The music -- a combination of restructured modern pop tunes manhandled into clever new forms -- is only half the wonder. McGregor and Kidman, he arresting, she luminous, sing their own songs and do so surpassingly well. This isn't the muddled, maudlin, lip-synchy love-schtick of Everybody Says I Love You -- it's the real thing, and as the film progresses you're repeatedly reminded why the old musicals hold such a unique place in the global consciousness, and why India's “Bollywood” -- with their massive yearly output of psychotronic musical nuttiness -- is now the largest and most popular film industry in the world. Moulin Rouge is set in turn-of-the-century Paris, which, to Luhrmann's mind at least, is a fairy-tale Bohemia populated almost exclusively by absinthe-maddened artistes, slinky alabaster courtesans, and gimlet-eyed playwrights. Into the nightly revel comes Christian (McGregor), a penniless poet of the most clichéd “truth, beauty, freedom, love” kind, who immediately aligns himself with the righteously outlandish denizens of the famed Moulin Rouge nightclub and cabaret. Here he meets the group's unofficial leader, little big mind Toulouse Lautrec (Leguizamo), who in turn introduces him to the club's lugubrious owner Zidler (Broadbent), and, much more importantly, to Satine (Kidman), the Rouge's star performer, a chanteuse-cum-courtesan with a heart of gold and an incipient consumptive. (The tiny crimson spatters caught in her handkerchief bode ill for the couple's love, but do wonders for the film's narrative arc.) Before long, Lautrec has hired Christian to pen the company's new play, a mish-mashy tale of love run amok, and Satine is surreptitiously scam-wooing a mincing moneybags Duke (Roxburgh) to secure funding for the troubled production. Satine and Christian, of course, fall madly in love amidst an unending Felliniesque backdrop of wild, cartoonish imagery and out-of-control editing and effects work; it should come as no surprise that the word love is uttered countless times. Luhrmann's film takes True Love very seriously, and though the film itself is hardly what I'd call serious fare, it's so enamored with the very idea of Love that only the rockiest heart could fail to crack under what amounts to one long, sustained massive musical air strike. As in his previous film, the simultaneously under- and over-appreciated William Shakespeare's Romeo + Juliet, Luhrmann takes a cavalier attitude toward realism, though that tack works far better within the confines of Moulin Rouge's fantasy world. Lyrics from Elton John, Nirvana, the Beatles, and Madonna are mix-and-matched into whole new (and occasionally revelatory) song structures, and McGregor and Kidman's voices are (thankfully) more than up to the task. Simply put, Moulin Rouge is a crazed, lovestruck, wholly original (and yet amazingly referential) beast, part pop-culture wasteland, part glowing tribute, and part wild-eyed roller coaster (of love). If you allow yourself to go with it all the way, it's a shockingly fun ride.