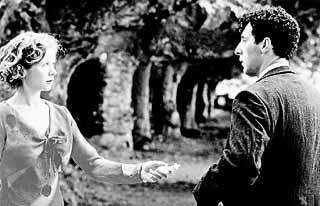 “Patterns keep repeating themselves,” exclaims chess prodigy Alexander Luzhin (Turturro) in a moment of discovery that provides a key to his life history as well as the course of this movie. Set in the late Twenties in an Italian lakeside resort, The Luzhin Defence is a lovely-to-look-at period romance that, other than the beautifully played eccentrics at the heart of the story, is a predictable, emotionally unengaging, and occasionally corny story that does little to showcase the finest attributes of the many talented people involved. Most baffling is the pattern changes we've witnessed in the last two films by Marleen Gorris. The first films of this Dutch director's career (A Question of Silence, Broken Mirrors, The Last Island, and the multi-award-winning Antonia's Line) were all thematically original works, written by the director and evidencing strong feminist ideas and storylines. With her last two films she has altered her pattern and made films based on works by great writers, and whose adapted screenplays have been penned by others. Both 1997's Mrs. Dalloway, based on the Virginia Woolf novel (screenplay by Eileen Atkins), and now The Luzhin Defence, based on an early novella by Vladimir Nabokov (screenplay by Peter Berry), lack passionate narrative involvement and original story detail. Each of these two movies carefully enunciates its period trappings and focuses on the things left unsaid between people, but when placed side by side with Gorris' earlier films, these latter works seem enervated and spiritless. The casting of Turturro, as the obsessed chess misfit Luzhin, and Watson, as Natalia, the woman who comes to love him, is the best thing about the movie. Both actors are seasoned pros in the art of playing off-kilter characters and they bring their many skills to bear on their nuanced portrayal of this pair. Still, there is not enough character background here to make us see what it is that these two see in each other. He's a distracted, otherworldy chess savant who has little, if any, connection to common reality. She likes the way he is incapable of small talk and, as her mother observes, she was partial, even as a child, to eccentrics and stray animals. But the montage of their lovemaking set to schmaltzy strains of a waltz at once tells us nothing about the lure of their intimacy and everything about the hokey patterns to which this love story subscribes. So, too, the story's villain -- a cardboard enemy missing only a mustache and a black hat. The Luzhin Defence is not without interest -- it's one of those period dramas about upper-crust Europeans in vacation resorts, which at first we think we've seen a million times before. It's not quite as predictable as the first glance implies, but closer examination leaves little more to uncover.