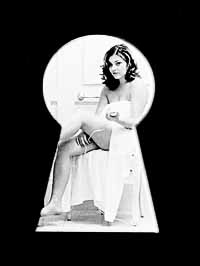 The title (intentionally) recalls one of Alfred Hitchcock's latter-year suspenses, The Trouble With Harry .... The trouble with Hitchcock's Harry was that he was dead; the trouble with first-time French director Dominik Moll's Harry is that he is very much alive and very much a lunatic. While washing his hands at a rest area in the French countryside, Michel (Lucas) bumps into Harry, an old classmate. For the life of him, Michel can't remember Harry, despite having broken his tooth in a rugby match years ago. Harry does remember Michel, though, so much so that he can perfectly recite a poem Michel wrote a decade earlier. Harry quickly, confidently ingratiates himself with Michel and his young family, and at first, he seems like the kind of friend we'd all like to have: quick with a joke, eager to please, and happy to make the lives of his friends easier (for example, he buys his friends a souped-up SUV to replace the wheezing family station wagon). But the friendlier Harry gets, the more corpses that begin to accumulate. The suspense of this film -- and it's seat-squirming suspenseful -- isn't in figuring out who the bad guy is. We know it's Harry (Michel does not). But we don't know where he'll strike next, how far his psychoses will stretch, how weirdly his almost beatific smile will twist. While Moll never apes Hitchcock, the influence is obvious: the deliberate pacing, the eerie ambient noise (the simple sound of a crackling overhead light is terrifying here), the ability to make our demons uncomfortably likable (Harry recalls the silken-smooth baddies from Strangers on a Train and Shadow of a Doubt). Occasionally, Moll's pacing becomes too deliberate. Good suspense is like a symphony of crescendos and diminuendos, each little shock producing a rise, then falling back into deceptive safeness, until the final big bang. With a Friend Like Harry ... produces an absolutely breathless mid-section, then loses its footing and fumbles until the final, spasmodic conclusion. It may be a bumpy ride, but Moll has given us in his cast more than able guides. Lucas and Seigner (as Michel's wife) perfectly embody the harried couple whose love is sometimes superseded by the stresses of “married with children.” Guillemin (as Harry's fiancée, Plum) has the Kewpie-doll face of Jodie Foster in Taxi Driver, but without the street smarts; she is utterly believable as the flimsy but well-meaning link between Harry and sanity. But With a Friend Like Harry ... appropriately belongs to Lopez. His mannequin glaze and never-wavering smile provide more creepy-crawlies than a thousand quivering violins or perfectly timed thunderclaps -- and what delicious creepy-crawlies they are. One suspects Hitch would be proud. 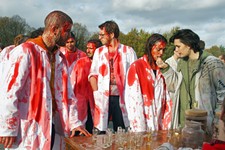 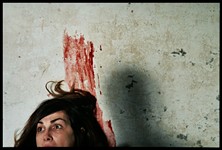