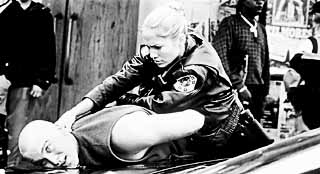 Its heart is never in the wrong place, but Angel Eyes is what Roger Ebert calls an “Identikit movie.” Director Mandoki and screenwriter Gerald DiPego (both of whom you may recall from 1999's Message in a Bottle, similarly themed in retrospect) have assembled it from a set of standard-issue components. The photogenic Lopez is a Chicago cop with a brusque manner and an abusive dad she once sent to the slammer (shades of 1990's Blue Steel, whose long-suffering mom, Louise Fletcher, reappears here as classy Sonia Braga). The brooding Caviezel is a mysterious, perpetually trenchcoated lurker who's never more than two steps behind her; in different lighting set-ups, he looks like Martin Donovan, Tom Cruise, or a young Eric Roberts. He has an unusually electric rapport with a neighbor boy, whom you half expect to proclaim, “I see dead people!” While J. Lo hangs out in Kevlar loungewear, Pay It Forward alumnus Caviezel (whose character is inexplicably named “Catch,” a word that just isn't a proper noun) wanders the city doing thankless good deeds. After she risks her life in the aftermath of a drive-by shooting, he springs to her aid, apprehending a gun-toting perp. The two begin a star-cross'd, cat-and-mouse romance, complete with a “getting to know you” montage. The pairing has chemistry, largely because the Bronx-bred Lopez seems to get a kick out of her character's tough-girl mien. And the movie really does have the nicest of intentions: It strives feverishly to please melodrama fans, pouring on the flashbacks and tear-jerking homilies about trust and learning to love again, even bringing in a scruffy stray dog in the third act. Viewers with a low tolerance for schmaltz may suffer; one heartfelt speech even drew nervous titters from the otherwise indulgent preview crowd. This one has “date movie” written all over it, and it's far less a cop thriller than the ads suggest. Yet there is a compelling mystery afoot: How did master cinematographer Piotr Sobocinski, a former collaborator of Krzysztof Kieslowski, wind up here? He's given so little to do (other than photograph Lopez, that is) that weird, expressionistic camera moves end up in the unlikeliest places: swish pans in the middle of a family conversation and a crane shot in a cops-and-robbers foot chase. Yet these techniques don't make the film seem any less formulaic.