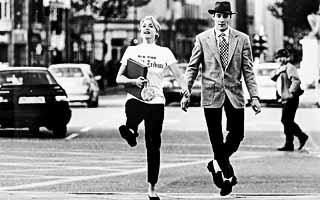 Irish novelist Roddy Doyle is perhaps one of the luckiest authors working today. Beginning with The Commitments in 1991, he's had three of his already popular (and populist) novels brought to the screen by two of the best directors working today. Alan Parker's take on The Commitments was an unqualified and somewhat unexpected international success; 1993 saw The Snapper, helmed by Stephen Frears, who also tackled The Van three years later. Not all of these films were shepherded to theatres with as much care as Parker's film, though certainly all of them have their followings. This is due as much to the wry Irish humanist-cum-humorist leanings in the source novels (he also penned the scripts for the first two films) as it is to anything the director has contributed. This new film, based on an original screenplay by Doyle, suffers from some of the same problems that made The Snapper and The Van linger in the audience's memories roughly about the same length of time as a takeaway chip shop's greasy fare lingered in their bodies. Both earlier films were too goofily broad-minded in their depictions of (in the first) the effects of an unplanned pregnancy in a lower-class Irish household and (in the second) a lower-class Irish family's struggle to keep their family business financially solvent. When Brendan Met Trudy fares a bit better in the silly department, but it's also cloying in its bid to be ingratiating; like most of the Doyle oeuvre I've seen, it wants you to like it just a tad too much. McDonald plays Brendan, a shy, reserved Dublin schoolteacher who spends his days absently teaching English to the sort of boisterous soccer-hooligans-to-be who seem to exclusively populate Brit and Irish films since time immemorial and his nights devouring all things cinema. Both his schoolroom and his flat are decked out with posters from A Bout de Souffle -- Breathless -- and the look on his mother's face when his Christmas gift to her is a Godard biography (“It's different from last year's,” he tells her) says it all. Into this wannabe nouvelle vague life comes Trudy (Montgomery), a sexy blonde thief with a zero inhibitions. It's an unlikely romance (what else could it be?), and so you know, right from their first meeting, that the pair are bound to hit it off. They do, and the film promptly spends an abundance of time putting them in a series of nutty, cinematic homages. In short order, Brendan is seen as William Holden in Sunset Blvd., Gene Wilder in The Producers, Jean-Paul Belmondo in Breathless, and many more. Unfortunately for both Doyle and us, Walsh's film isn't anywhere near the cinematic history it ceaselessly references. McDonald, for one thing, is too mousy, and Montgomery too manic; you get the feeling in real life they'd repel each other like opposing magnetic forces. It's the type of film that begs to be called “charming” and by doing so instead ends up grating.