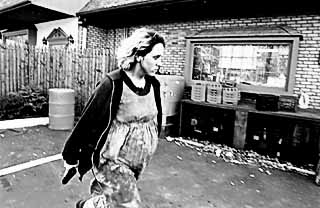 Forgive me for stating the obvious: American culture is in the grip of reality TV. Furthermore, every armchair sociologist in the land has an opinion, entertainment forecast, or theory as to what this phenomenon means or says about us as a people. Therefore, it also stands to reason that every street-corner satirist will eventually crack wise on the trend. If only all these commentators had something original to say. Series 7, which was workshopped at Sundance and filmed in 2000 prior to the first Survivor's appearance on the American airwaves, is a note-perfect parody of the reality TV craze. Yet for all its attention to the cosmetic details of the format, Series 7 fails to pay off in the parody department. In fact, it is a rather cynical expression of our culture's willingness to submit to the every beck and call of this kind of programming. In its opening seconds, Series 7 drops us into the episodic world of The Contenders, the movie's fictive reality TV program, which is now in its seventh season -- or Series 7. The show's only premise is that six people are chosen at random, and then each is armed with a gun and a cameraman and set loose to kill the five others until only one of them remains alive. Quickly we learn that Dawn (Smith) is its reigning champion, having won the last two rounds (which means she has already killed 10 people). Throughout the course of the show we learn nothing of the unconscionable entity behind such a lethal television concept or how our society might have reached such totalitarian proportions that we all submit obediently to faceless orders to kill on command. “Real people … in real danger” intones the unctuous voiceover of the host. The contestants have no choice but to kill or be killed. In addition to getting the host and the teasers absolutely on target, Series 7 is shot on hand-held digital video, which captures the look as well as the sound and episodic nature of these now-ubiquitous shows. Director Minahan's uncanny anticipation of the rise of reality television is remarkable, I suppose, but his movie does little more than ape its conventions and then carry it to its most grotesque extreme -- yet even then it fails to sweeten its extreme satire with touches of levity along the lines of a movie like Death Race 2000. The movie's bright touches belong primarily to Brooke Smith (who is most recognizable for her role as the kidnapped woman held captive at the bottom of the pit in The Silence of the Lambs). She lends a believability and intensity of purpose to her role as two-time champion Dawn, an eight-months-pregnant pregnant contestant exerting some kind of perverse “maternal instinct” to do right by the child she carries. The only prize to be won is life itself and the dubious honor of playing one more round. Minahan also shows some cleverness in a Goth music video parody he sets to Joy Division's “Love Will Tear Us Apart.” Otherwise, Series 7 casts us adrift in a contempo world ruled by gladiatorial zeal and bloodless emperors. 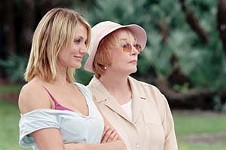 In Her Shoes
Even if these Shoes are not perfectly stitched, the fit is nevertheless comfortable and the look is polished. 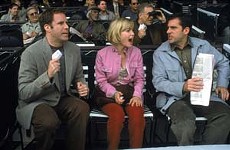 Melinda and Melinda
Woody Allen literally imagines a scenario as both a comedy and a tragedy, but we can't understand why half of this movie isn't at least amusing.