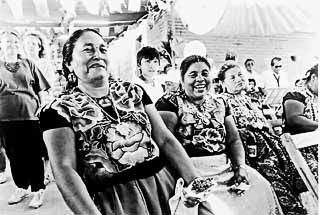 Blossoms of Fire is a bright, amiable chronicle of the vivid lives of the women of Juchitán, a small, sun-soaked city on the Isthmus of Tehuantepec in Oaxaca, Mexico. The Tehuantepec women are already famous -- from the paintings of Miguel Covarrubias and Frida Kahlo, from their embroidered handicrafts, and from their prominent role in the COCEI, the political party that challenged the long-standing single-party rule of the PRI and has maintained a foothold in the region since 1989. But directors Gosling and Osborne's jumping-off point here is an article about the community in the French edition of Elle, which charges that the women “prohibit the men from buying and selling” in the markets and carry on with young lovers while forcing their husbands to “babysit.” It's a gross misconception, made all the more insulting by the article's mondo tone, and the directors intend to set the record straight. They follow various townspeople through the farmland, markets, and fiestas of Juchitán, documenting what is in reality a highly pragmatic and mutually satisfactory partnership between men and women in a pre-industrial mercantile economy. Since there is no concrete division between the hearth and the community, women participate as visibly in the marketplace and in civic affairs and as they would in the home, selling produce and dry goods and managing the family finances while the men harvest or fish. (One husband interviewed proudly remarks on his wife's fiduciary prowess, “The money will bear fruit.”) If all this sounds a bit dry and academic, perhaps it is. But let it be said that this sensible division of labor creates ample opportunity to party -- the whole community throws down with gusto for days-long wingdings that are perhaps the best evidence of the Tehuantepec people's colorful, passionate lives. A longtime film editor and collaborator with legendary documentarian Les Blank (Burden of Dreams), Gosling carefully weaves the interviews and footage into a thorough investigation of the Tehuantepec region's political history, its ongoing struggle with modernization, and its vanishing indigenous culture and language. There's enough detail to have earned the film an award from the American Anthropological Association. The only real disruption is Gosling's sporadic use of personal voiceover, which probably isn't necessary to tell the story of this subject. (See related interview with Maureen Gosling in this week's Screens section. Gosling will be in attendance to conduct Q&As following the evening screenings on Friday and Saturday.)